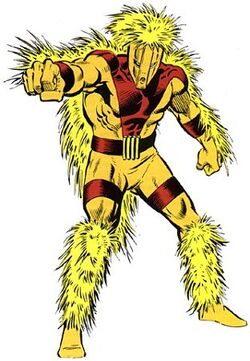 The Porcupine's weapon was his battlesuit, made of metal and advanced plastics, which served a wide variety of purposes and functions.

First, the battlesuit served as defensive armor, it was highly resistant to damage, so much so that even small explosions of nitroglycerin did relatively little damage to it, and failed to harm its wearer whatsoever.

Moreover, the battlesuit was covered with razor-edged steel quill-like projections, which would seriously injure any normal, unprotected person who seized hold of them.

The battlesuit also contained a large array of offensive weapons. For example, the Porcupine could fire the sharp quills at his opponents.

Furthermore, many of the seeming quills that could not be fired were actually disguised tubes or guns through which the Porcupine fired various weaponry. The Porcupine could fire laser beams, concussive bombs, small rockets, tear gas, sleeping gas, smoke screens, acetylene torch flames, liquid cement, wheels giving off hypnotic lights, and high voltage blasts of electricity, as well as other weapons. The Porcupine's battlesuit included a gas mask to protect him from the gases ejected from his costume.

The Porcupine's battlesuit also included jets that enabled him to fly for short distances.

The controls for the Porcupine's battlesuit were located in his costume's belt and gloves.

Like this? Let us know!
Retrieved from "https://marvel.fandom.com/wiki/Porcupine_Armor?oldid=6430654"
Community content is available under CC-BY-SA unless otherwise noted.