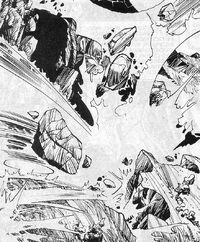 Aliases
"terrible convulson of the Earth"[1]

The cataclysm leveled much of Earth's society and further reshaped its land masses:[2]

The territory around the Inland Sea, which later became known as the Caspian Sea, remained largely unaffected.[1]

Afterward, champions and menaces emerged throughout the world.[2]

Retrieved from "https://marvel.fandom.com/wiki/Post-Hyborian_Cataclysm?oldid=5642535"
Community content is available under CC-BY-SA unless otherwise noted.