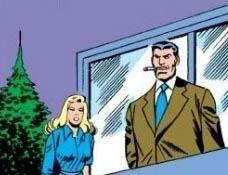 Dr. Karl Malus, a mad scientist who had experimented on various superhuman individuals, went to work for the Power Broker Corporation founded by Curtiss Jackson, using technology to augment the strength of paying customers to superhuman levels. The strength augmenting process was tremendously risky, with half the subjects dying or becoming severely deformed, but this information was kept a closely guarded secret. Power Broker and Malus also used highly addictive drugs on their subjects, telling them that the chemical was necessary to stabilize their powers, but in fact it only served to keep the subjects working for-- and paying --the Power Broker. One such victim was Sharon Ventura, who was also sexually abused while drugged. Many wrestlers of the Unlimited Class Wrestling Federation, which is only open to those with super-strength, have used the Power Broker's services, and wound up indebted to them.

Power Broker was also responsible for the strength augmentation of the U.S. Agent and Battlestar.

When Power Broker, Inc. was attacked by the vigilante known as the Scourge of the Underworld, Curtiss Jackson exposed himself to his own augmentation device in an attempt to gain the super-strength necessary for his self-defense. The process went awry, leaving him so grotesquely muscle-bound that he could not move. Malus decided to take advantage of this situation by sending Vagabond, who knew Jackson (having previously approached him about gaining super-strength herself), to obtain a copy of his fingerprints so that Malus could access all of Jackson's personal accounts and vaults. He used an explosive wristband to force Vagabond's cooperation, but she managed to knock Malus out, destroy the fingerprint mold, place the band on his wrist, and inject him with the drug he had planned to use on her.

The Power Broker had Malus' legs broken for his betrayal, then promptly re-hired him to try to cure Jackson's condition. Malus captured and experimented on several augmented individuals, including Battlestar, which drew the involvement of the U.S. Agent. Together, Battlestar and the Agent freed the captured wrestlers, and forced Malus to restore their strength. The U.S. Agent then destroyed Malus' equipment and records.

Power Broker has been responsible for providing augmented henchmen to various criminal organizations, such as the Sweatshop and the Power Tools.

A new Power Broker has recently appeared as the latest owner of Power Broker, Inc.[1] Very little is known about him, other then he wears a battle suit, and can project bolts of energy from his hands. He was responsible for giving Hardball his powers.

Like this? Let us know!
Retrieved from "https://marvel.fandom.com/wiki/Power_Broker,_Inc._(Earth-616)?oldid=6127416"
Community content is available under CC-BY-SA unless otherwise noted.