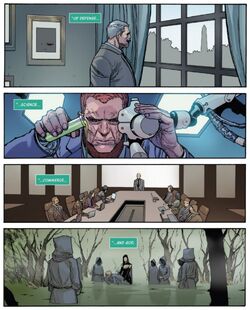 The Power Elite was a secret trust of influence brokers formed after Hydra's takeover of the United States in response to the political climate of the country. Acting under the belief that America had become weak and plagued by parasites, the Power Elite intended to strengthen the country to mark a new beginning.[2]

Like this? Let us know!
Retrieved from "https://marvel.fandom.com/wiki/Power_Elite_(Earth-616)?oldid=6494791"
Community content is available under CC-BY-SA unless otherwise noted.