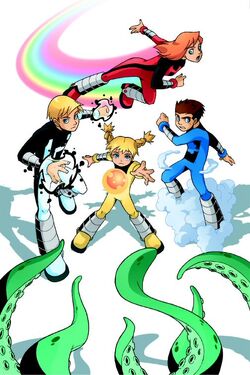 Over the course of their adventures, the team moved to New York and teamed up with other heroes like the Avengers, X-Men and the Fantastic Four. They also recruited Franklin Richards as an honorary fifth member, even though he had no superpowers of his own at the time. During their adventure in Asgard, Power Pack briefly changed their team name to "Warriors Four" to blend in after an Asgardian girl they saved from a group of Dwarves called them such.[2]

This incarnation of Power Pack are the titular stars of 11 miniseries, each consisting of 4 issues.

A second Power Pack mini-series by the same creative team, X-Men and Power Pack debuted in October 2005. The series guest-starred various members and villains from the X-Men comics, including Cyclops, Wolverine, Sabretooth, Beast, Mystique, and Nightcrawler.

A third Power Pack mini-series, entitled Avengers and Power Pack Assemble! debuted in April 2006. This series teamed the Pack with various members of the Avengers (Captain America, Tony Stark, Spider-Man and Spider-Woman). Issues #3 & #4 were a two-part adventure in which the Pack and the Avengers battled Kang the Conqueror

A fourth Power Pack mini-series, entitled Spider-Man and Power Pack, debuted in November 2006. The series featured Spider-Man and some of his rogue's gallery, such as the Vulture, Sandman, and Venom. The miniseries included two sub-plots: in one, Spider-Man was reduced in age and temporarily joined the Power siblings; the second involved the Venom Symbiote costume.

A seventh Power Pack mini-series, Iron Man and Power Pack, debuted in November 2007, co-starring Iron Man, who previously appeared in the Avengers & Power Pack: Assemble mini-series. The series was written by Marc Sumerak and the artwork was done by Marcelo Dichiara.

A eighth Power Pack mini-series, entitled Power Pack: Day One debuted in March 2008. The series, which featured the same creative team as Fantastic Four & Power Pack (Fred Van Lente and Gurihiru), focuses on the origins of the team and the incorporation of their honorary member, Franklin Richards. There are also back-up stories about each of the Power siblings with artwork by Colleen Coover.

A ninth series, Skrulls Vs. Power Pack, made its debut in July 2008. The storyline involved the Power Pack encountering the alien Skrulls. This miniseries also introduced the Kymellian Kofi Whitemane to this continuity. The creative team was Fred Van Lente as writer and Cory Hamscher as artist. Gurihiru provided the covers and the colors.

A tenth miniseries, Wolverine and Power Pack, made its debut in November 2008. Wolverine had previously appeared in the X-Men and Power Pack miniseries. The series reunited the original creative team of Marc Sumerak and Gurihiru and also included Scott Koblish. Logan and the four children confronted Sauron, faced the Danger Room, and defended the Xavier school against Sentinels, giant robots programmed for anti-mutant genocide. Logan and Power Pack also had adventures together in 19th-century New York City and present day Tokyo.

An eleventh Power Pack miniseries began April 2010, with Thor appearing and co-headlining, called Thor and the Warriors Four. The creative team was writer Alex Zalben and artwork once again by Gurihiru. Thor and the Power children confront an evil plot of Loki in order to save the Powers' grandmother. The series also contains a back-up adventure of Hercules telling the story of his Twelve Labors while babysitting the Pack.

Retrieved from "https://marvel.fandom.com/wiki/Power_Pack_(Earth-5631)?oldid=5549649"
Community content is available under CC-BY-SA unless otherwise noted.