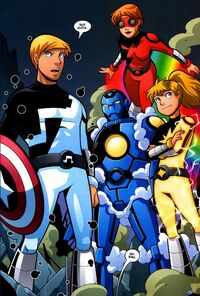 This incarnation of Power Pack are alternate, adult versions of the Earth-5631 Power Pack, so most of their history is identical to that team. They were one of the few teams of superheroes that remained active after Kang the Conqueror captured the Avengers and conquered the world. In the 10 years that followed, they kept opposing Kang from the shadows, trying to find the missing Avengers. The tides turned when they met their younger Earth-5631 counterparts, who had been send here by Kang. Teaming up, both Power Pack teams were able to locate and rescue the Avengers. When this was done, they successfully helped their younger selfs to get back to their own time and prevent Kang from ever conquering the world in the first place. This most likely erased this version of Power Pack from existence since their timeline never came to be.[citation needed]

Retrieved from "https://marvel.fandom.com/wiki/Power_Pack_(Earth-68326)?oldid=4785598"
Community content is available under CC-BY-SA unless otherwise noted.