It has been suggested that this article or section be merged with Power Pack (Earth-616)#Equipment. (Discuss)
Power Pack Uniform 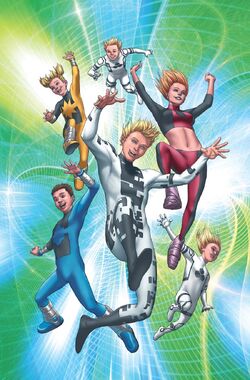 Each member of Power Pack was given a costume based on Kymellian clothing constructed from unstable molecules by the Smartship Friday. Franklin Richards was later given a costume by Friday as well. With the verbal command, "Costumes On," the costume will appear, replacing any existing clothes.

The costumes are maintained when not in use by residents of an alternate reality known as Elsewhere. In addition to summoning, alterations to the costumes can be made by contacting the Elsewhere tailors with notes left in the pockets. Alterations include space worthy costumes and underwater ones as well. Notices also need to be left in the pocket to transform the costumes to indicate the powers possessed by its member. Additional accessories can also be added that become part of the permanent costume until the kids express a desire to alter them again. The pockets of each costume are portals to Elsewhere. Therefore, the kids can hold a significant amount of stuff in the pockets of their costumes without creating a bulge or weight. The limits of the Elsewhere tailors have yet to be expressed.[1]

Like this? Let us know!
Retrieved from "https://marvel.fandom.com/wiki/Power_Pack_Uniforms?oldid=6439034"
Community content is available under CC-BY-SA unless otherwise noted.