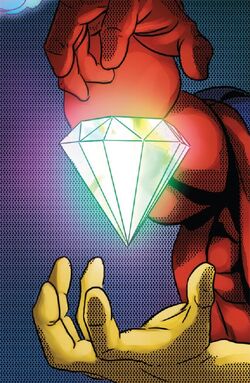 The original prism, used by the Kinji Obatu aka Doctor Spectrum, was a sentient being called Krimonn. Krimonn revealed that he had previously been a Skrull, who was transformed into a living prism as punishment after failing to usurp the Skrull Emperor. When the Grandmaster required champions to battle the Avengers, he retrieved the prism and granted Krimonn several energy-based powers that could be used in conjunction with a host. Kinji Obatu was the first to coin the term "Power Prism", and discovered that, although trapped in prism form, Krimonn remained aggressive and asserted his will via telepathy. Krimonn's mind was "muted" by Nebulon when the Power Prism was given to Billy Roberts, although Krimonn reasserted itself during the quest to find and bond with the Thor. When the plan failed and the gem was shattered, Krimonn's consciousness apparently dissipated forever.

Another Doctor Spectrum, Martha Gomes, was encountered by the Thunderbolts. According to her account, she simply woke up with the Prism. Giving the re-emergence of the Squadron Sinister, it was likely this was another plot of the Grandmaster. The prism was later stolen from Martha by Dr. Alice Nugent who became the new Doctor Spectrum and officially joined the Grandmaster's new Squadron Sinister.

A Power Prism later appeared in the possession of Joseph Ledger, a construct created by Mephisto on behalf of Phil Coulson to serve the Squadron Supreme of America. In Ledger's fabricated backstory, he was an astronaut who stumbled into the Power Prism during a space walk.[1] The true origins of this Power Prism, or if it was created in conjuection with Mephisto's construct, are unknown.

The Power Prism bestows on a host the ability to project and manipulate energy; create energy constructs of various shapes and sizes; flight; protection from the rigours of space and in the case of the original Doctor Spectrum, Kinji Obatu, the ability to become intangible. The Power Prism has one weakness: being vulnerable to ultra-violet light.

The Earth-712 Doctor Spectrum aka Joseph Ledger gains his power from tiny fragments of the Skrullian Power Prism, given to him by the Skrullian Skymaster, which have bonded to his skin and embedded within his body. When the Power Prism exploded, his skin, hair, and costume were bleached chalk-white. The Earth-712 Power Prism is identical to the Earth-616 version in terms of strengths and weaknesses. The Power Prism was a crystal apparently of Skrull construction. It was able to manipulate a form of multicoloured light energy depending on the user's willpower.

The Earth-31916 Power Prism is a sentient power source removed from the spacecraft that brings Hyperion to Earth. A soldier Joseph Ledger was given the Power Prism but the power overloaded him putting him in a coma. Awakening years later he becomes a government sanctioned hero Doctor Spectrum.

In this version the Prism is a living creature that feeds on emotions and can bring the fears and guilt of others to reality. The Squadron Supreme forced Doctor Spectrum to destroy their homeworld and become a member of the Squadron since. In Spectrums, it's mentioned that Ant Man built Doc Spectrum a power amplifier to control the Prism's power. When it's broken the spectrum brings the fears of Iron Man, Captain America, and Thor and after facing their fears they free Bill from the Prism's control. The prism goes off to Nighthawk and becomes the new Doctor Spectrum, a being of pure energy. In the final battle against the Squadron, Cap used Ant-Man's power amplifier to control the prism and use its power to turn the wavelength of Earth's Sun blue, as to weaken Hyperion.

On this Earth, the Power Prism was recovered from under the sea by an oceanographer named Nenet. Based on later investigations, it was tentatively linked to this universe's Kree, who were a reclusive race of wizards.[2]

Like this? Let us know!
Retrieved from "https://marvel.fandom.com/wiki/Power_Prism?oldid=6437756"
Community content is available under CC-BY-SA unless otherwise noted.