Appearing in "The Last Dream of Professor X"

Synopsis for "The Last Dream of Professor X"

Powers of X, increasing in scale and complexity. X0 - Year One, the Dream. X1 - Year Ten, The World. X2 - Year One Hundred, the War. X3 - Year One Thousand, the Ascension.

X0 - Charles Xavier is walking through a funfair. He is enjoying himself on this beautiful day, sitting down on a bench to people-watch. Here, he is approached by a young woman, Moira MacTaggart, who makes cryptic remarks about a fortune-teller. As the conversation goes on, Xavier mentions a beautiful dream he had, which he is trying to work out in his head, so it can be a story he can tell people. Moira remarks that a dream ceases to be a dream once it becomes real.

Xavier realises that something is not quite right about this, so Moira asks him to read her mind. Puzzled, he complies, but is surprised by what he finds...

X1 - Mystique emerges from a No-Place portal onto Krakoa accompanied by Toad. Telling Toad that he is off the clock now, she carries on alone to the House of M, where she meets Magneto. She tells him that her partner Sabretooth was captured during the heist, but she got the target - a memory stick. She will hand it over, but says her demands have increased. Xavier steps into view, and counters that they will ask more of her in return. Mystique mocks his seeming lack of humanitarianism. Xavier merely says that he is building a world safe for mutants, and that everyone will owe something to live there...

X2 - the war between the mutants and the Man-Machine Supremacy has gone on for years. A four-person squad of X-Men, consisting of three products of Mister Sinister's Mutant Breeding Program - Rasputin, Cardinal and Percival - and one defector from the Supremacy's Black Brain Program - Cylobel - are on a mission to extract something from the Nexus in the Northern Territory. Their mission has been discovered, leading to the death of Percival. Cardinal plants a Krakoa seed to be the exfil point, but Cylobel is captured alive and Rasputin struggles to free her. Additional forces arrive, and Cylobel demands that Rasputin leave her behind to complete the mission. Anguished, Rasputin runs.

Cylobel is taken to the Human-Machine Monolith, to stand before Nimrod the Lesser. Nimrod, recognising her as a Black Brain, offers a faux-apology: the Black Brains were created to infiltrate and betray mutant groups, but so many of them ended up betraying the Supremacy that the project was abandoned. Her very existence is a failure, and his tribute to that failure will be to ensure that no-one like her is allowed to survive.

The Supremacy wants to question Cylobel for information, but she is resistent to torture, and thanks to her status as a Black Brain, she is immune to telepathic reading. So, the Supremacy is forced to follow Nimrod's suggestion, which makes him briefly giddy. Nimrod orders that Cylobel be placed into a device of his construction - a coffin-sized tube of femtofluid, where she will drown as her body and mind will be rendered down as data, which, once the process is completed after an unknowable length of time, can be turned into a database to help the Supremacy win the war against the X-Men.

Emerging on Krakoa - now Asteroid K - Cardinal apologises to Rasputin, saying that, as a Cardinal - the pacifist failures of Generation Three of the Mutant Breeding Program - he is psychologically incapable of violence. Rasputin is inclined to hate him in the moment, but they have a mission to complete. The rest of the X-Men, including an aging Wolverine, are there for her to speak of the successful extraction of the target item, at the cost of Percival and Cylobel. Wolverine says they need to take it to "the Old Man"...

X3 - the Librarian considers the body of Cylobel, and laments that the minds in the database are begining to fade to digital decay. Nimrod the Lesser has given way to Nimrod the Greater, who admits that the database was not meant to survive for so long. The database was intended as a tactical advantage to let the Supremacy win the war, but the world changed so much that the war became unnecessary. Homo sapiens and its subspecies are over and past, but a habitat is maintained in the Nexus, a sealed biosphere containing some recreated humans living in pristine wilderness. A museum piece, to prick the curiousity of younger minds. To give them a sense of wonder at the long story of life on Earth - and to give an idea of the horror that could ensue if such creatures ever ruled Earth again...

Superstar writer Jonathan Hickman (INFINITY, NEW AVENGERS, FANTASTIC FOUR) continues his revolutionary new direction for the X-Men. Intertwining with HOUSE OF X, POWERS OF X reveals the secret past, present and future of mutantkind, changing the way you look at every X-Men story before and after. You do not want to miss the next seminal moment in the history of the X-Men! 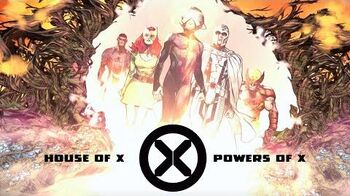 Retrieved from "https://marvel.fandom.com/wiki/Powers_of_X_Vol_1_1?oldid=5027389"
Community content is available under CC-BY-SA unless otherwise noted.