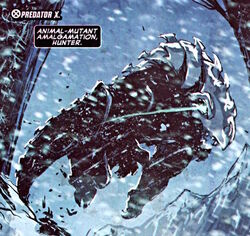 Before dying William Stryker commissioned the Facility to create a living weapon to aid in his crusade to eradicate the mutant race. One of the Facility's lead scientists, Adam Harkins, began development and dubbed his creation Predator X.[2][3]

Stryker originally planned to deliver the New X-Man Mercury as the final component of Predator X, but his death prevented him from delivering, leaving the Facility to capture Mercury.[2][3] Kimura ambushed both Mercury and X-23 at the Grind Stone Café in Salem Center capturing them both.[4] Harkins proceeded to torture and experiment on Mercury until he could duplicate malleable organic-metallic skin. Although X-23, Hellion, and the X-Men eventually tracked down Mercury's location, it wasn't before Harkins had completed three liquid metal covered Predator X monsters. The X-Men narrowly defeated two of them, but one Predator X escape.[3] At least one other Predator X was later released or escaped.[5]

The Purifiers began tracking the rogue Predator X in hopes of using it as a weapon against how Stryker originally intended. Following a trail of massacred mutant remains, the Purifiers lured Predator X out with a corpse dressed in a abaya previously worn by Dust and X-23 and still retaining their scent.[6]

After the birth of the first new mutant born since M-Day, both freed Predator X beasts immediately began heading towards Cooperstown, Alaska drawn by the strength of her X-Gene.[7][5] The first Predator X to arrive encountered Cable and Deadpool trying to escape with the infant mutant. Predator X ate Deadpool whole and almost immediately regurgitated him, but not before Deadpool planted a live grenade in its gut, blowing it up from the inside. Shortly after that, Deadpool dressed in some of the remains of this Predator X to draw the attention of a O*N*E Sentinel away from Cable and the baby allowing them to escape.[5][8]

A second Predator X arrived in Cooperstown sometime later, missing the firefight between the Purifiers, the Marauders, and the X-Men. This Predator X then consumed the bodies of Blockbuster and Prism before beginning to track the new mutant infant once more.[7][9] While en route, Predator X came across and devoured an unnamed fire-breathing mutant in the Canadian Rockies.[10] Predator X later tracked and killed Peepers in upstate New York.[11]

Predator X next appeared at the X-Mansion, digging up graves of deceased mutants in the school's cemetery.[12] With most of the X-Men already dispatched or injured, only the New X-Men were left to defend the school and the wounded. In a moment of panic, Pixie teleported the New X-Men, Beast, the injured mutants, and Predator X to the site of final battle of the Messiah Complex on Muir Island. Upon arriving, Predator X killed and ate Vertigo and almost immediately attacked Bishop, ripping off his right arm and preventing him from attacking Cable and the baby. The X-Men and X-Force joined in the battle and Predator X was finally stopped when Wolverine was swallowed whole, allowing him to tear his way out of the beast's gut.[13]

To obtain a biotech weapon, Viper and Hydra approached Kimura and The Facility to purchase a Predator X. The Punisher broke up the deal in New York City and tracked the monster to Madripoor, but he wasn't the only one; Wolverine also heard about the Predator X and headed to Madripoor as well. Outside of the Princess Bar, Punisher and Wolverine engaged Kimura, Predator X, Viper, and her Hydra soldiers in battle. Predator X was killed by Kimura piercing its soft palate after Punisher ran both her and himself into its mouth.[14]

As revenge for meddling, Viper and Kimura developed two more Predators using DNA from their intended prey: one specifically programmed to hunt Wolverine and the other specifically programmed to hunt Punisher.[15] Although Wolverine and Punisher were able to destroy the Predators, the demonstration provided Harkins with evidence of success in programming his new Predator Xs.[16]

With nearly the entire worlds mutant population recently relocated to one small island in the San Francisco Bay, the C.E.O. of Sublime Corporation, Lobe, launched his plans to duplicate, diminish, and distribute mutant powers to create a new species: Homo perfectus.[17] To begin collecting the genetic information needed, Lobe obtained six Predator Xs (presumably from The Facility) and infected them with microscopic cybernetic nanites designed to collect and record genetic data on the mutant genome. While five Predators (designated X001, X002, X004, X005, and X006) were placed with an abducted and coerced Scalphunter on a plane aimed at Utopia, Predator X003 either escaped or was released into the sewers of New York City.[18]

As the plane approached Utopia, the X-Men quickly discovered the Predator X cargo abroad.[18] Cyclops shot down the plane with one well placed optic blast, and killed Predator X001 in the process. Predator X002 was stopped by Namor and his Elite Atlanteans soldiers, while X004 and X005 made it ashore but were destroyed by two groups of X-Men: One by Magneto, Northstar, Iceman, Colossus, and finally killed by a Boom-Boom bomb, the other by the precedents (except for Magneto, exhausted after his effort), Cyclops, Wolverine, Madison Jeffries, Storm, Dazzler, Warpath, and finally killed by Scalphunter. Predator X006 was able to breech the interior of the island, entering an open air-vent to attack the non-combatants in the shelter. However, Predator X006 was destroyed by Rogue using the borrowed powers of several Young/New X-Men including Rockslide, Gentle, Armor, Mercury, Surge, Dust, and Anole.[19] The Predators' remains were burned releasing the nanites into the atmosphere of Utopia as Lobe had planned.[20]

Meanwhile in New York City, Predator X003 stalked and killed the homeless former Acolyte Gargouille and her friend in the sewers.[21] One of Gargouille's friends that survived recruited Fantomex to hunt and kill the monster. While following up on the source of the Predators and the nanites, Wolverine, Colossus, and Psylocke found Fantomex just after killing the Predator (which he named "Melvin"). The X-Men discovered Lobe and his team as the source of the Predators and attacked them at the Sublime headquarters.[22]

When mutants began disappearing off the streets of Hong Kong, Magneto traveled to China and purposely allowed himself to be captured. Once captured, Magneto discovered mutants were being pitted against a Predator X for sport in a gladiatorial arena. While only one Predator X fought at a time, there were at least three held in the complex. The facility also utilized Sentinel-based technology for mutant tracking/identifying, and Mutant Growth Hormone for recreational proposes. Although Magneto could not discover the identity of the Sentinel or Predator X providers, he followed the MGH back to its source in a small abandoned town.[23]

A Predator X was first seen[24] when Loki's henchmen Okuma and Rosetta successfully tricked the young mutant Noriko Ashida into stealing the Avengers' DISKs and all the villain DISKs the team had so far gathered for them. Knowing that Wolverine, who had been tasked by Professor X to find Noriko and bring her to Xavier's Institute, would come looking for her, the two released Baron Zemo and Predator X from their DISKs. Wolverine in turn had Hikaru D-smash Cyclops from his DISK so they could team up. Cyclops fought Baron Zemo while Wolverine took on Predator X.

Besides the powers and abilities described below, this incarnation of Predator X was also capable of spitting a purple poison which could temporarily disrupt Wolverine's healing factor. When hit by this poison, Wolverine was incapable of fighting for a while, and Cyclops could only temporarily fight due to the limited time that he could stay out of his DISK. Fortunately, Chris and Captain America arrived just in time to save the situation. Captain America defeated Baron Zemo, after which both Zemo and Predator X were recalled to their DISKs by Okuma.[24]

Predator X is a genetically engineered animal-mutant hybrid developed for the express purpose of hunting and killing mutants.[1] The Predator X are dependent on mutant DNA with an insatiable craving for mutant blood, bone, muscle, and flesh. It craves its next meal even while finishing its current fare. Its abilities and powers include:

Some of Predator X's strengths can also become liabilities or weaknesses including:

Like this? Let us know!
Retrieved from "https://marvel.fandom.com/wiki/Predator_X?oldid=6506994"
Community content is available under CC-BY-SA unless otherwise noted.