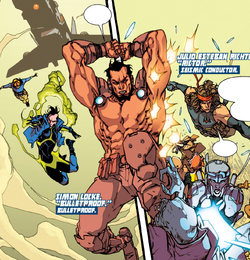 The Press Gang was formed from the X-Men that remained on the X-Topian island of Genosha to help set up a new government after its previous anti-mutant government was overthrown by mutant slaves. When a fatal disease called the Extinction Virus began to affect mutant on Genosha, the island was put under quarantine by X-Topia Province's Baron, Rachel Grey, and no one was allowed to enter or leave.

Desperate to find a cure, the Press Gang and its leader, Havok, decided to attack X-Topia's capital, X-City, and kidnap X-Man Triage and Rogue so they could use mutant healing power to cure the Extinction Virus's afflicted. The attack was successful in capturing Triage. Rogue was also captured by Press Gang member Karma whose power to absorb the powers of others could be used to help Triage heal the sick. The attack, however, cost the life of Press Gang member Chief Magistrate Anderson. Baron Summers, angry from the audacity of the Press Gang's attack and the damage done, ordered an attack on Genosha.[1]

Soon after, Baron Grey and her X-Men attacked Hammer Bay which lead to an engagement against the Press Gang. During the fight, it was accidentally discovered that the Press Gang's supposed ally, Dr. Aldus Kluge the Genegineer, who was supposed to study Triage's healing power to create a cure for the Extinction Virus, had actually been using his research to resurrect Cameron Hodge, the leader of the former anti-mutant government of Genosha. Kluge admitted that he was the one that created the Extinction Virus and had planned to use the Transmode Virus and an Adamantium exoskeleton to turn Hodge into a fighting machine in order to purge mutants from Genosha. Press Gang member Bulletproof killed Kluge for his treachery.[2]

Kluge's death didn't stop Hodge's resurrection, however. The X-Men and the Press Gang were forced to join forces to fight Hodge, but Hodge was too powerful for both groups to defeat. Press Gang member Wolfsbane then devised a plan to stop him. Using Press Gang member Mystique as a distraction to buy her enough time to get to their airplane along with Havok and X-Man Bombshell, Havok and Bombshell combined their powers to unleash a massive explosion while Wolfsbane crash-landed into Hodge, leaving no trace of them behind.[3]

Like this? Let us know!
Retrieved from "https://marvel.fandom.com/wiki/Press_Gang_(Earth-24201)?oldid=5549683"
Community content is available under CC-BY-SA unless otherwise noted.