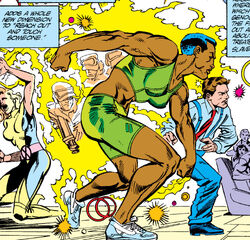 The Press Gang is a group of mutant enforcers working for the government of Genosha.

The mutant residents on the island nation are enslaved by the law, and were genetically altered by the Genegineer into Genoshan Mutates, who are devoid of free will. They perform any task needed from hard labor to soldiers.

The Press Gang was created to retrieve mutants who attempt leave and defect to other countries, as this action is not recognized by Genoshan law.

The Press Gang is an official branch of the Genoshan police force known as the Magistrates, the squad consists of three field operatives and one support operative. It was discovered by the X-Man, Havok that they mutants working voluntarily for the government, rather than enslaved Mutates.[citation needed]

Like this? Let us know!
Retrieved from "https://marvel.fandom.com/wiki/Press_Gang_(Earth-616)?oldid=5549684"
Community content is available under CC-BY-SA unless otherwise noted.