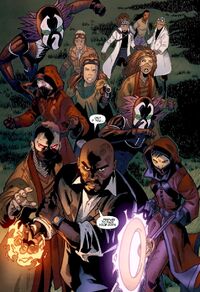 Origin
Six mortal married couples chosen to serve the Gibborim in exchange for wealth, power, and eternal life acting as the covert rulers of the Los Angeles criminal underworld

The Pride. The covert rulers of Los Angeles' underworld for a quarter of a century. Time-travellers, telepathic mutates, alien invaders, mad scientists and dark wizards. Silly, powerful terms. Deadly terms. Their existence unknown for years before their apparent deaths.

Requiring mortal acolytes to serve them on Earth, the Gibborim summoned twelve individuals (six married couples) to their Marine Vivarium. In exchange for sacrificing human souls to them, the Gibborim promised wealth, power, and influence to their potential servants during the remainder of their mortal lives. Additionally, the Gibborim promised that six of them that served the Gibborim the most faithfully would be rewarded and saved from the Gibborim's scourging of Earth and allowed to rule in paradise while the remaining six would perish with the rest of humanity. Each couple agreed to the Gibborim's terms, and The Pride was formed.[7][29]

As promised, the Pride gained wealth and power and became the covert rulers of L.A.'s criminal empire.[7][4][30] Every year, the Pride gathered at the Wilder Estate, ostensibly for an annual charity fundraiser, while in reality, they would perform the "Rite of Blood," a ritual sacrifice of an innocent and unwilling human; the spirit of this victim would then be fed to the Gibborim in the subsequent "Rite of Thunder".[31][7][3] The person sacrificed every year was usually taken from the neighborhood of Imperio and was more often than not a young woman.[32]

Three years after the formation of the Pride, Janet Stein became pregnant. After some discussion, the decision was made that each couple would conceive one child, and those six children would inherit the Gibborim's reward and place in paradise. This agreement also ended the open struggle between the members of the Pride.[7]

Working together, the Pride ruled over their criminal empire with vision and efficiency for a quarter of a century with few real challenges to their power.[7][15][33][34][4][30]

Six months before their deaths, Gene and Alice Hayes conspired with Frank and Leslie Dean to betray and murder the other Pride members. As (artificial) mutants and aliens, they had a shared disdain for humans.[35][3] It was the accidental discovery of this plot that led Alex Wilder to begin scheming to save his parents and the Minoru family that eventually led to his death and the deaths of the Pride.[36]

One year after discovering the Pride and the secret plans of the Hayes' and Deans, Alex Wilder led the Pride's others children to discover their parents murdering Destiny Gonzales during "The Rite of Blood".[31] Terrified by what they discovered, the children decided to run away.[11]

With the help of Lieutenant Flores and the L.A.P.D., the Pride framed their children for the murder of Destiny to force their children out of hiding and prevent them from telling the truth. While searching for the children, the Pride killed vampires, threatened police, and continued to manipulate monitoring systems.[4] After Lieutenant Flores brought Cloak and Dagger to L.A. to search for the kids, Catherine Wilder shot him in his leg and the Hayes' erased Cloak and Dagger's memories, preventing them from sharing information with other superheroes.[24] During all this time, the Pride continued to prepare for the upcoming "Rite of Thunder".[3]

On the night of the "Rite of Thunder", the Runaways followed the Pride into the Marine Vivarium. After manipulating his teammates into defeat, Alex Wilder revealed himself as the Pride's mole and shared how he had learned about the Pride, and the Hayes' and Deans' plot of betrayal.[3] However, before the arrival of the Gibborim, the Runaways were able to defeat Alex and Molly Hayes was able to destroy the device imprisoning Destiny's soul. The Gibborim arrive furious that their sacrifice was not ready and immediately killed Alex while threatening to murder all the Pride and their progeny. While everyone in the Pride was killed, the Runaways were able to narrowly escape the destruction of the Marine Vivarium in the Leapfrog.[36]

Depressed after finding out about Alex Wilder's death, his friends from his online MMORPG began planning to bring him back.[31][8] Together they researched the Pride and used the Abstract to cast a spell to retrieve Alex from the past before he died. During the ceremony, Oscar died and a young Geoffrey Wilder was summoned to the present instead of Alex.[8]

Believing that Alex and the Pride were the "good guys", Hunter, Stretch, and Lotus formed The New Pride with the young Geoffrey Wilder.[37] To gather more information about the Runaways, Geoffrey posed as Chamber using the Minorus' Chameleon Glamour Charm and joined a rival group of teen superheroes called Excelsior.[11]

Once the New Pride had gathered enough information, they directly confronted the Runaways and kidnapped Molly Hayes.[37] Geoffrey offered to sacrifice Molly's soul to the Gibborim if they promised to reunite him with his wife. During the rescue, Geoffrey seemingly murdered Gertrude Yorkes. Furious, the Runaways captured Geoffrey, erased his memory, and sent him back to the past to avoid further impact on the timeline.[13] Following Gert's death, Stretch checked himself into a mental health facility and Hunter joined the Peace Corps to atone for the "blood" on his hands.[2] Meanwhile, Lotus returned to her day job until Chase Stein forced her to assist her to help him contact the Gibborim to resurrect Gertrude.[38] However, this plot ultimately failed.[39]

Retrieved from "https://marvel.fandom.com/wiki/Pride_(Earth-616)?oldid=5654138"
Community content is available under CC-BY-SA unless otherwise noted.