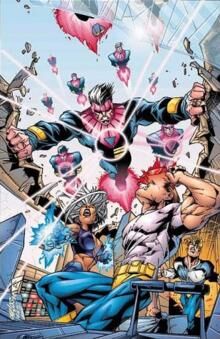 The Omega Prime Sentinel class was a scrapped prototype design initially conceived by the director of the Prime Sentinel Network, Bastion, and intended to spearhead the Zero Tolerance initiative, with the most recent addition to his ranks, Karima Shapandar, to be among the first of many whom he would soon create in order to lead his Bio-Sentinel forces.[citation needed] Bastion revitalized it through the Transmode / Apocalypse Virus while creating his Human High Council.[citation needed] Similar to the standard Prime Sentinel precursors, Omega Primes were Sentinels who were forcibly modified through an infection of nanotechnology injected into them by the mutant hunting Synthenoid who created them.[citation needed] But these were apparently prototypes, as their designs were clunkier than other Prime Sentinels.[citation needed] The only difference being their ability to adapt and evolve new and deadly mechanical apparatuses through their biomechanical microtech, which made up their cybernetic anatomy.[citation needed]

In a unique twist, Bastion would eventually revive the Omega Sentinel program after being revived through his use of a Spawn of the Technarchy known as Magus.[citation needed] As the Nimrod programming began to act irregularly with the Celestial Technology within his system, Bastion began to revert into his Nimrod persona and, in the act of which, transformed two of his Councilmen into advanced Prime Sentinels reminiscent to Nimrod himself.[citation needed]

Omega Prime Sentinels, like Karima Shapandar, possess functions and equipment which far outstrip standard Prime Sentinels.[citation needed] Omega Prime Sentinels mimic all the natural qualities of fully robotic Sentinels, yet are more akin the design schematics of the Nimrod's of a divergent future.[citation needed] Nevertheless their natural biomechanical functions remain roughly the same, albeit with some room for modification given their natural adaptation protocol when facing new threats.[citation needed] Functions which include rocket boosted flight and superhuman strength, speed, stamina, durability, mechanical regenerative properties, being equipped with some level of EM basedpowers, etc., as well as the natural mutant detection sensory facilities which enables the tracking and identifying of Homo superior.[citation needed] What sets an Omega apart from a standard Prime Sentinel, showcased by Karima, is their natural ability to produce nanobionic constructs from their bodies using onboard technology, enabling the direct interfacing and commandeering of all cybernetic systems and their adjacent machinery, enslaving any mechanical system they come in contact with to their own will.[citation needed]

Like this? Let us know!
Retrieved from "https://marvel.fandom.com/wiki/Prime_Sentinels_(Earth-616)?oldid=5549698"
Community content is available under CC-BY-SA unless otherwise noted.