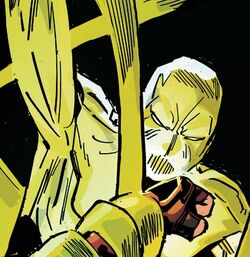 Primus is the most sophisticated genetic creation of the Swiss master geneticist Arnim Zola. Zola, who utilized scientific knowledge amassed by the genetic offshoot of humanity called the Deviants, became an expert at engineering bioforms from living cells (usually human) according to whatever template he desired. Certain of his bioforms, notably Primus and Doughboy, were given malleable tissue able to shape-change into various configurations.[1]

Primus was the first of Zola's creations who possessed creative intelligence and a high degree of autonomy. When Zola captured the hero Captain America and woman Donna Maria Puentes with the aid of Doughboy and Primus, Primus discovered he experienced desire for the woman. Zola wished to use her for genetic experimentation, however, and refused to let Primus have her. Enraged, Primus attacked Zola. Zola used his will-subverting ESP box to make Primus merge with the extremely pliant and nearly mindless Doughboy.[2]

Eventually Primus took control of Doughboy and escaped from Zola's castle which was engulfed by flames at the end of Zola's first encounter with Captain America. There Primus met the younger Baron Zemo, who had journeyed to Castle Zola to enlist Zola in his crusade against Captain America. Primus joined him instead, using his shape-shifting powers to take on the shape of Amim Zola. Zemo's plan was to totally ruin Captain America's reputation before killing him. Holding the Avenger captive, Zemo sent Primus, in the form of Steve Rogers, Captain America's secret identity, to appropriate his private life and totally subvert all of his personal relationships. However, when Primus met Steve Rogers' girlfriend Bernadette Rosenthal, he again felt desire and decided to continue the masquerade without disrupting it in order to have her love. Captain America escaped from Zemo's lair, and forced Primus to reveal who he really was. Primus managed to abduct Rosenthal and flee from the hero, affording him the opportunity to reveal to her his desire to unite natural and artificial men to create a new order to save the planet. He also wanted to give Rosenthal a new mutated body like his. Captain America tracked him down, and engaged Primus in combat. Although Primus's great strength and malleability gave him the upper hand, Rosenthal provoked him to give up the fight by rejecting him and professing her love for Captain America.[3]

Primus later worked with the "Mad" Thinker to observe the New Warriors.[4]

Primus later began working for Arnim Zola again who was forced to work for the company Absoluton Solutions to experiment on superhuman prisoners. Primus and Zola and operated out of a bunker in North Dakota formerly used by the villainous group Factor-3. After Zola failed to capture the mutant D-Cel using a brainwashed Quicksand, D-Cel friend Juggernaut smashed his way into Zola's bunker to stop him. However, Primus was able to restrain Juggernaut and capture him. When D-Cel entered the bunker to help Juggernaut, Primus captured her as well. Before Zola could experiment on D-Cel, Juggernaut smashed his way out of his containment. He then took out Primus by unleashing a thunderclap that dispersed Primus into many pieces.[5]

Primus is an artificial lifeform capable of changing its shape to any form it can imagine. It possesses superhuman strength, endurance, regenerative properties, and resistance to physical attack.

Like this? Let us know!
Retrieved from "https://marvel.fandom.com/wiki/Primus_(Android)_(Earth-616)?oldid=6108649"
Community content is available under CC-BY-SA unless otherwise noted.