Prism has a crystalline body.

They couldn't have gotten far. Let's shed some light on the problem. Move it, Marauders!

The details of his recruitment by Mister Sinister to the group of assassins known as the Marauders are unknown. Prism first appeared as part of a "search and destroy" mini-team of Marauders, consisting of himself, Arclight, and Scrambler. Their mission: eliminate the members of X-Factor, who were leading an evacuation mission to help Morlocks escape the Marauders. After using his powers to reflect Cyclops's optic blast back at him, X-Factor member Jean Grey used her telekinetic powers to slam Prism against a nearby wall. Much to everyone's surprise, the move killed Prism as his body was ultimately too fragile to survive being slammed against the wall.[3] 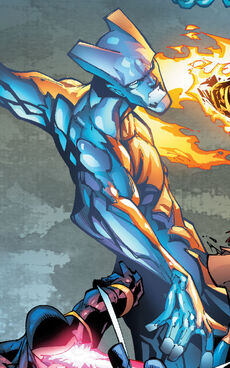 Prism, along with his fellow Marauders that did not survive the Mutant Massacre, was ultimately resurrected by Mister Sinister using his cloning technology. However, Prism's lifespan was once again cut short when he was killed by a group of demonized police officers during the opening hours of the Inferno, in a rematch between the Marauders and the X-Men.[4]

Prism was cloned again and fought X-Man alongside other Marauders, and died again as Grey telekinetically pulled the trigger of Scalphunter's gun.[5]

Prism was institutionalized in a mental hospital when M-Day occurred. There, he rose to power and exacted revenge on his fellow patients who harassed him before they lost their powers.[1]

Alongside the other Marauders, Prism ambushed the X-Men at Mystique's residence, and participated in the ensuing battle. The Marauders quickly defeated the X-Men and kidnapped Rogue, returning to Mister Sinister. It was also revealed that Prism, with several of his teammates, assassinated the Dark Mother, who claimed to be an ancestor of Jean Grey. He would later fight Iceman and Cannonball alongside the other Marauders as well.[6]

Soon, a mutant baby was born after M-Day (the first since the event); the Marauders went to retrieve it in Alaska. Prism's body was shattered by a Purifier during the chaos.[7]

Once again resurrected due to cloning, Prism rejoined the Marauders under Chimera. Unbeknownst to Prism and his teammates, Chimera had been mind-controlled by Da'o Coy Manh and sent the Marauders to battle the X-Men. During the battle, Karma attempted to mind control Chimera, leading to the discovery of her sister's interference. Prism and the other Marauders fled, though Da'o Coy Manh located them and forced them to kill each other. The X-Men later discovered their corpses in their hideout.[8]

Magneto took an interest in punishing the Marauders for their actions during the slaughter of the Morlocks and sought out a laboratory where clones of the mercenaries were ready to be activated. Magneto brought the clones to life and proceeded to hunt and kill each wave of Marauders until he was satisfied. Magneto then programmed the new clones of the Marauders to be completely loyal to him.[9]

Prism later joined his teammates in freeing Magneto from S.H.I.E.L.D. custody.[10] When Magneto created a safe haven on Genosha, Prism investigated a series of murders which had occurred on the island.[11] At some point afterwards, Prism died. Afterwards, he became one of the many deceased individuals whose body was reanimated by Persephone to be used for her bidding.[12]

Following the foundation of a mutant state in Krakoa by the hand of Charles Xavier and his allies, Prism resurfaced as a citizen of the nation, having been presumably reborn by the hand of The Five, a group of mutants capable of combining their powers into a process of resurrection, brought together by Xavier as part of his plans for mutant ascension.[13] He was later seen with his arms around Mister Sinister in the Green Lagoon.[14]

A Prism from Mister Sinister's clone farm beneath the Essex Home for Foundlings was later held captive by the Goblin Queen.[15] At Scalphunter's request, the Hellions were sent to investigate and possibly recruit the legacy Marauders. However, the Goblin Queen used Scalphunter's former teammates against the group, transforming them into zombie-like creatures. Prism attacked Havok, but the Goblin Queen shattered the clone as he stood in her way.[16]

Later, the High Council of Krakoa decided to resurrect all of the legacy Marauders, including Prism, but without their genetic enhancements from Mister Sinister.[17] This presumably occurred before Prism was seen earlier on Krakoa.

Able to refract most forms of energy directed at him, including ambient light. He is also capable of storing light within his body, using it to light-up dark rooms or project and amplify it at his enemies.[citation needed]

His body can be shattered by heavy blows or collisions.[citation needed]

Prism has apparently died three times during his time as a Marauder. The first was when Jean Grey used her telekinetic powers to throw Prism against a wall, smashing him to pieces[3]. The second was during Inferno, where a group of policemen shot Prism and shattered him. The third and final time was when X-Man used his mental powers to slaughter all of the Marauders[5]. It is unknown if Prism actually did die, or if he was able to piece his crystal body back together; this would explain his overconfidence and willingness to battle those stronger than him (Sinister regularly cloned members of the Marauders when they died).