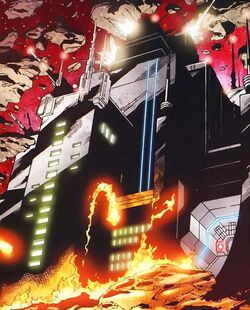 During the Super-Hero Civil War, a group of heroes led by Iron Man, Mister Fantastic and Yellowjacket created a massive prison in the Negative Zone to house captured non-registering heroes as they waited for their trials. It was designated Negative Zone Prison Alpha but nicknamed "Fantasy Island" or "Wonderland" by inmates. Tony Stark himself named it "Project 42", as it had been the 42nd idea out of a hundred that he, Reed Richards and Hank Pym had created following the Stamford Disaster. There were portals to it planned for every single state so prisoners could be transported there by the different teams in the Fifty State Initiative- including one at Ryker's Island. It was very clean, with sanitation, but extremely heavily-guarded, including password-changes every ten minutes.[6][7]

The prison's most notable former inmates were Iron Fist (posing as Daredevil at the time), Cloak and Dagger, Speedball, Prodigy and Prowler. It was also the setting for the final battle of the Super-Hero Civil War, as Iron Man set a trap for Captain America but the Captain retaliated by using his planted mole, Hulkling, to release all the prisoners of 42 who came to his aid. Though in the ensuing battle Cloak managed to teleport all its superhuman detainees out, it remained as a prison for villains such as Lady Deathstrike and Taskmaster. (Taskmaster was later released to become the trainer for new Initiative recruits and Deathstrike seemingly escaped to assist in the Purifiers' crusade to hunt the Messiah Baby.) It also held many of the Sakaaran forces after the events of World War Hulk.[8]

During and after the events of the Skrull Invasion, the caretakers of 42 abandoned the prison and left the inmates to take over the facility and disconnect themselves from Earth. 42 and its "residents" were later confronted by Blastaar, who had made himself king of the Negative Zone and planned to lead an army to invade Earth via 42's teleportation device.[9] Eventually, one of the inmates, Skeleton Ki, betrayed his fellow earthlings and allowed Blastaar and his forces to take over Wonderland. Thanks to the timely assistance of The Guardians of the Galaxy, along with the unregistered superhero Jack Flag, Starlord was able to escape and warn Reed Richards, Gauntlet, and Baron Von Blitzschlag about Blastaar's armies.[10] The gates to 42 were shut down and the Negative Zone was sealed off from Earth. After Norman Osborn instated the Thunderbolts Initiative, the Shadow Initiative was dispatched in successfully retaking 42 from Blastaar despite suffering heavy casualties.[11]

After the mass breakouts of superpowered criminals from The Vault, The Big House, The Cube, and The Raft, Iron Man began working with Mr. Fantastic on building a prison in the Negative Zone.[12] The Negative Zone Prison Alpha or "Prison 42" was then constructed.[13] The guards were the same Ultron models used as guards in the Big House. When Ultron rebelled, the Ultron guards were replaced with S.H.I.E.L.D. Agents.[14]

Eventually Annihilus came and led his Annihilation Wave in an attack on Prison 42. Because of the numbers of the Annihilation Wave, the Avengers had to release some of the superpowered inmates in order to fight them. During the attack, the Annihilation Wave killed Blizzard, Radioactive Man, Whirlwind, and three A.I.M. agents. After Annihilus was defeated, the S.H.I.E.L.D. Agents for the next guard shift arrive.[15] In the aftermath of the attack, a new prison called the Hydrobase was created in New York harbor to replace it.[16]

Like this? Let us know!
Retrieved from "https://marvel.fandom.com/wiki/Prison_42?oldid=6105770"
Community content is available under CC-BY-SA unless otherwise noted.