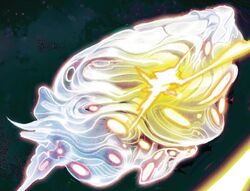 The Prison of Angels was a planet-sized space vessel run by the Ladies of Sorrow, a group of countless of Angels of Heven. Its cells doubled as testing rooms for broodstock because, due to the low male population in Heven, Angels often resorted to using conquered foes for breeding. In addition to regular tortue sessions, a prisoner's cell would serve as a death trap, forcing its inmate to endure different seemingly custom-made hazards. The Prison possesses a miniature black hole which serves as its gravity well.

In anticipation to their involvement in the War of the Realms after deciding to side with Malekith, the Angels captured Angela and imprisoned her in the Prison of Angels. After learning of Angela's disappearance, Thor and Valkyrie went to Heven to investigate. They were subdued by the Angels and taken to the Prison of Angels as well. After surviving the torture and reuniting with Angela, Thor called for his backup: Thori, Toothgrinder and Aragorn. They tore through the ranks of the Ladies of Sorrow and broke Thor and his allies free. Thor, Angela and Valkyrie continued fighting the Angels until only four remained. Since they refused to answer to Thor's interrogation, Thor fastened the entire ship to one of his substitute hammers and sent it flying into the depths of space.[1]

Retrieved from "https://marvel.fandom.com/wiki/Prison_of_Angels?oldid=5296419"
Community content is available under CC-BY-SA unless otherwise noted.