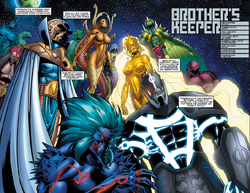 The entire pantheon is said to have been the very first organisms created in the current universe after the Big Bang. Initially, they were just organisms with no awareness, only tasked to help the universe and to prepare "what exists for what is to come." Eventually, they evolved awareness and as the reasons they were created were no longer needed, Diableri, Aegis, and Tenebrous sought new purposes, becoming corrupted. Civil war ensued among the Proemial Gods, and eventually Diableri and his allies brought the battle to Galactus.[citation needed]

Supposedly most of the pantheon was wiped out by the civil war, with Diableri killed by Galactus, and Aegis and Tenebrous imprisoned in the Kyln. Antiphon died while imprisoned in the Kyln, and Tenebrous and Aegis were captured when the Silver Surfer lured them into the Crunch, the outer edge of the Universe, and nearly died in the process. They were later freed by the Surfer, to assist them in a fight against the Many-Angled Ones, but Aegis was killed, which caused Tenebrous to flee.[citation needed]

Antiphon was "tasked with monitoring cosmic consonance". He also bears a very striking resemblance to the Watchers. Possibly he was their forebear.[citation needed]

Brio was "tasked with the welfare of fledgling life-forms." The unnamed Proemial God shown behind Brio in the image bears some minor resemblance to the Celestials.[citation needed]

The demon-reminiscent Diableri was the creator of the Chaos Sprites, of which Skreet is said to be the last one.[citation needed]

Like this? Let us know!
Retrieved from "https://marvel.fandom.com/wiki/Proemial_Gods?oldid=5648768"
Community content is available under CC-BY-SA unless otherwise noted.