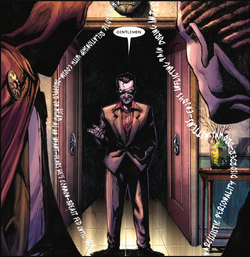 The sons of the defunct criminal cartel known as the Committee re-established their organization and set about getting revenge against one of their former agents, Moon Knight. To that end, they hired a consultant known only as the Profile. The Profile reviewed the case history of Marc Spector and advised the Committee on the most efficient means of breaking him in body and spirit. The Committee members acted on the Profile's advice, but their poor strategic planning actually produced the exact opposite result. When Marc Spector resumed the mantle of Moon Knight, he destroyed the Committee's headquarters.[2]

The Profile went underground, but soon resurfaced when Moon Knight began searching for one of his old colleagues, Midnight. Under severe pressure, the Profile offered up a complete dossier on Midnight, and even advised Marc on how to improve his love life[3] as well as helping him to essentially blackmail a man into getting him signed up for the Superhuman Registration Act in the way he wanted.[4]

When Moon Knight returned to New York City, Profile was enlisted by The Hood to help determine how to destroy him, but he had difficult reading the new "Jake Lockley" persona.[5] He asked The Hood to resurrect Bushman, but when Moon Knight chose not to kill Bushman, Profile traveled to Egypt where he finally understood as he knelt at the shrine of Khonshu.[6]

The Profile possesses the ability to "read" people, and learns intimate details about their nature and personality. The ability appears to be psionic in nature, and although similar to telepathy, the Profile cannot read another individual's mind. He can only gleam random details about an individual, such as whether or not they are smoke, or suffer from a eating disorder, etc. He perceives varying signals given off by others and from there can determine their individual programming.[7]

The Profile possesses the strength level of a man his age, size and weight who engages in moderate regular exercise.

The Profile is almost never seen without his red-lensed sunglasses.

Like this? Let us know!
Retrieved from "https://marvel.fandom.com/wiki/Profile_(Earth-616)?oldid=5566852"
Community content is available under CC-BY-SA unless otherwise noted.