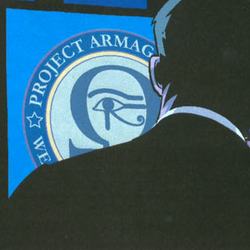 Project Armageddon was a clandestine super-solder program and top secret genetics experiment that was dedicated to artificially inseminating female subjects to produce a mutant offspring that the United States government could research and develop as a genetic weapon. By experimenting on the subject known as Beatrice, the program yielded multiple subjects, notably Domino, but all proved to be failures until program yielded a successful subject in the form of Lazarus.[4]

Charlie was a soldier who served in the secret government Project Armageddon.[2]

Retrieved from "https://marvel.fandom.com/wiki/Project_Armageddon_(Earth-616)?oldid=5549704"
Community content is available under CC-BY-SA unless otherwise noted.