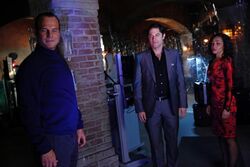 A group with firm ties to Hydra, Project Centipede was a secret project designed to give people superpowers through the use of a Centipede-looking device. One of the recipients of the device, Mike Peterson, was given enhanced strength and durability. Project Centipede also had lesser ties to A.I.M.'s Extremis virus and Abraham Erskine's Super-Soldier Serum, as well as was powered by Gamma Rays.[1] The Centipede device, however, had a drawback of potentially exploding its users due to the Extremis element.

Project Centipede's operative Raina later recruited Chan Ho Yin, a man with unusual control over fire. After draining him of his fire-resistant blood, the project was able to stop their test subjects from exploding, though they would require regular injections. The project further led an attack on a prison, to liberate their agent Edison Po Despite the Extremis factor in the serum being stabilized, Centipede soldiers required regular injections to maintain their superstrength. Their superpowered agents soon entered a fight with SHIELD, where they encountered Mike again, who had retained his power. After the encounter, the project captured the SHIELD agent Phil Coulson, along with a wounded Mike. SHIELD was later able to rescue Coulson, as well as simultaneously take out Project Centipede bases across the globe thanks to information from Vanchat. However, Mike remained in the project's custody and was given a mechanical leg and an explosive eye implant, which would detonate if he defied the project.

The Clairvoyant, the project's leader, set a trap for Coulson's team, in order to learn the process by which Coulson was revived. In the end, the Clairvoyant personally joined Coulson's team while undercover, stole any many vials of the GH drug before the base was destroyed.

Agent Grant Ward, revealed to be a Hydra double agent, springs Raina from prison and brings her to meet the Clairvoyant, who is revealed to be a double agent like him and does not possess any powers, to restart Project Centipede. However, their attempts at using the GH drug to resurrect corpses went poorly at best. Ward had stolen a hard drive with Jemma Simmons' research on the GH.325 version of the drug, but Skye had programmed the device to delete all information if anyone but herself access it, forcing Ward to go back in undercover to get the password from her. Once he succeeded, Raina was able to recreate GH.325, which was used to save the Clairvoyant when his cybernetics were affected by an EMP. This not only saved his life but granted him the full power of the Centipede serum.

Hydra's new poster boy, Ian Quinn attempted to sell Centipede-powered soldiers to the US military, but the Clairvoyant went insane as a side effect of the reverse-engineered drug, leading him to kill a visiting general and imprison six others. This leads to Quinn to cut and run. Centipede soldiers then defended Cybertek's New Mexico facility during an assault by Coulson's team, and were ordered to revert to default protocol to defend the Clairvoyant. Ultimately, the Clairvoyant is killed and the remaining Centipede soldiers are taken into custody by the U.S. military. Without regular injections, the soldiers would lose their super strength and doctors were planning on extracting their explosive eye implants. Thus, Project Centipede is officially brought to an end.

Retrieved from "https://marvel.fandom.com/wiki/Project_Centipede_(Earth-199999)?oldid=5581929"
Community content is available under CC-BY-SA unless otherwise noted.