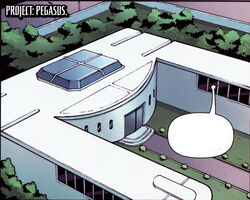 Project Pegasus is a scientific base. The history of the base prior to its first appearance in this reality is unknown, but most likely mirrors that of Earth-616.

Dr. James Power was hired by Douglas Carmody to come and work at Project Pegasus to develop new method of converting matter to antimatter without impractically large expenditures of energy. Unbeknown to him however, his new employer Carmody was actually in league with an alien race called the Snarks, who wanted to possess this invention, the Annihilator, for themselves. When the Snarks kidnapped Dr. Power and his wife, their four kids were given superpowers by another alien named |Aelfyre Whitemane. Together, they saved their parents from the Snarks.

Meanwhile, at Project Pegasus, Carmody foolishly tried to activate the Annihilator Dr. Power had already built, jeopardizing the entire Earth. To make matters worse, The Snarks attacked Project Pegasus to steal the Annihilator, leading to a massive battle between them and the Guardsmen. Power Pack successfully disposed of the Annihilator, and the Snarks were defeated. Afterwards, Carmody was unmasked and arrested, and project P.E.G.A.S.U.S. presumably closed down since the Power Family moved to New York.

Retrieved from "https://marvel.fandom.com/wiki/Project_P.E.G.A.S.U.S._(Earth-5631)?oldid=5381158"
Community content is available under CC-BY-SA unless otherwise noted.