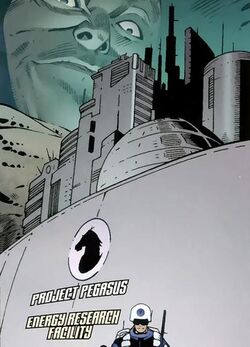 Project Pegasus (Potential Energy Group/Alternate Sources/United States) is a scientific base. Project: Pegasus was originally intended to research alternative (and unusual) forms of energy, but has also been used as a prison for super-powered individuals. The facility is located in the Adirondack Mountains in New York.[citation needed]

Several heroes have served terms working security at the facility, including the Thing and Quasar. At one time it also served as a temporary home for the Squadron Supreme when they were exiled from their own universe.[citation needed]

Like this? Let us know!
Retrieved from "https://marvel.fandom.com/wiki/Project_P.E.G.A.S.U.S._(Earth-616)?oldid=5549724"
Community content is available under CC-BY-SA unless otherwise noted.