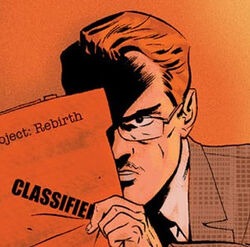 Project: Rebirth,[4] also called Operation: Rebirth,[2] and Project: Super Soldier,[1] was a U.S. government project originally administered by the U.S. Army to create a new line of Super-Soldiers for its World War II effort. Its success allowed the concept to grow and expand, becoming the larger operation known as Weapon Plus.[5]

Now in the US the project began as a collaboration between American and British governments. He was given the code name of "Joseph Reinstein"[7] and became the primary source of the American program. Dr. Erskine independently created both the chemical portion of the project, the Super-Soldier Serum, that has been recreated to certain degrees, as well as the Vita Ray housed in the Vita-Ray Chamber treatment that has not been recreated since.

The project created two failed subjects: Clinton McIntyre, a.k.a. Protocide, and Adriana Soria, a.k.a. Queen. Protocide was placed in suspended animation and was revived in the modern era by A.I.M.[8] Queen was the first mutant experiment. Experimentation on her seems to have occurred prior to the serum being tested on Steve Rogers.[9]

Erskine continued to refine the process and eventually succeeded in being able to convert frail Steven Rogers into the first Super Soldier. Rogers took the name Captain America. But Erskine was murdered moments after Rogers was successfully empowered. All of the refinements Erskine had made to the program were lost with his death, as he never fully documented all of his research to the recorded notes. What had made the process successful with Rogers, especially the Vita-Ray portion, could not be recreated at the time. William Burnside (a.k.a. Steve Rogers II) eventually found and used the chemical portion of this process to become the Captain America of the 1950s.[10]

With Erskine's murder, Wilfred Nagel took over the American program under the code name of Josef Reinstein. Nagel's attempt to recreate Erskine's successful process with Rogers, did not succeed in mass production. Nagel's early attempts to recreate Erskine's successful chemical formula resulted in African-American super soldiers (most prominently Isaiah Bradley). Three hundred African-American soldiers were taken from Camp Cathcart and subjected to potentially fatal experiments at an undisclosed location in an attempt to recreate Erskine's successful Super-Soldier Formula. Only five men survived the original trials; hundreds of test subjects left behind at Camp Cathcart and the camp's commander were executed by US soldiers in the name of secrecy. The families of the three hundred were told that they had died in battle.[11]

While Nagel failed to create a working mass-production version of Erskine's formula, Nagel did make relatively successful samples, such as the one that kept then Colonel Walker Price younger than his chronological age and still muscular and fit into his 90's.[12]

Although there were many later attempts to recreate or reverse-engineer Operation: Rebirth's Super-Soldier Serum in detail, none are known to have been involved with Weapon Plus, nor have been successful in replicating the missing Vita Ray portion. The exception was an attempt which resulted in the creation of Isaiah Bradley's son Josiah X. Weapon Plus considers Steven Rogers its most successful creation.[11]

A second Project Rebirth later began as an offshoot of the Sym-Soldier Program, a super-soldier operation using captured symbiotes to create super-soldiers.[13] After capturing the Venom symbiote, Project Rebirth 2.0 attempted to bond it to military hosts to create "Agent Venom" - killing Cal Henricksen after he lost control before succeeding with Corporal Flash Thompson, who was initially signed up for 20 missions.[14][15] Project Rebirth 2.0 came into conflict with Crime Master's syndicate and was raided by the Spider-Queen's horde during the Spider-Island incident.[16] Upon being made aware of Project Rebirth 2.0's existence, Captain America personally shut it down,[17] and its resources were appropriated by Weapon V.[18]

The Mercury Team was created in response to Project Rebirth 2.0's successes and failures with Agent Venom.[19]

Retrieved from "https://marvel.fandom.com/wiki/Project_Rebirth_(Earth-616)?oldid=5742273"
Community content is available under CC-BY-SA unless otherwise noted.