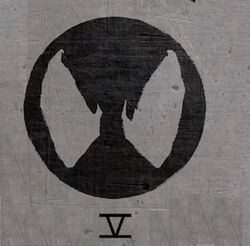 Weapon V, also known as Project Venom, was a codename for the fifth installment of the Weapon Plus Program, a top-secret supersoldier initiative. In 1965, an alien dragon made of living darkness was discovered frozen in a glacier by S.H.I.E.L.D. and codenamed Grendel. A team led by Nick Fury began experimenting with samples extracted from the Grendel and discovered they could be bonded to host organisms to create predatory monsters. Under pressure from the government to produce a replacement for the M.I.A. Captain America, Fury initiated a symbiote-supersoldier program in 1966 and field-tested it during the Vietnam War, to disastrous results.[1][2] After the Sym-Soldier Program was declared a failure by S.H.I.E.L.D. and officially shut down, Weapon Plus surreptitiously took over and rebranded the initiative as "Weapon V" or "Project Venom" - appropriating personnel, research, and symbiote samples while crediting Fury as the founder.[3]

Over the next few decades, Weapon V closely monitored subsequent U.S. Government-initiated offshoots of the Sym-Soldier Program such as Project Rebirth 2.0 and the Mercury Team, appropriating research and technology from them. Learning from their successes and failures, Weapon V determined that the Sym-Soldier prototypes had been corrupted by the symbiote hive-mind and were able to create suits of bio-armor virally-altered to be free of the contamination.[4]

Seven weeks after the Grendel symbiote-dragon reawakened and attacked Manhattan,[5] the Weapon V Headquarters was attacked by the symbiote-augmented serial killer Carnage, who had bonded to a sample of the Grendel symbiote and been greatly empowered by its connection to Knull, the dark elder god who had created the symbiotes billions of years ago. Most of the personnel were slaughtered, but Mars Team - a strikeforce led by Robert Urquhart - managed to escape and plot revenge by forcibly enlisting the aid of fellow Weapon Plus experiment Weapon H. However, Weapon V's head of research and development, Dr. Andrew Breen, went insane and sabotaged Mars Team's fight against Carnage, enabling him to kill them all.

In the aftermath, Weapon V was subsequently shuttered by the head of Weapon Plus, Director Junger, until the threat posed by Carnage had passed.[4] Following this, the program was restarted with Dr. Randall Pierce as its new head researcher.[6]

In addition to wielding military ordinance, Weapon V operatives can use their symbiotes to manifest claws, fangs, spikes, tendrils, and blades.[4]

Like this? Let us know!
Retrieved from "https://marvel.fandom.com/wiki/Project_Venom_(Earth-616)?oldid=6430129"
Community content is available under CC-BY-SA unless otherwise noted.