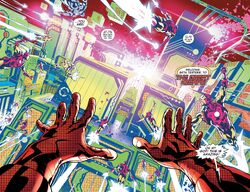 The eScape was a digital platform created by Stark Unlimited. It consisted of a virtual universe intended to amplify the human experience which also allowed its users to go anywhere, become anyone and do anything. The eScape was populated by a myriad of A.I.s acting as non-player characters. Under a hedonistic pretense, Tony Stark secretly developed the eScape to test if A.I.s and humans could interact on every level as equals, since he was fearing for his own humanity after having reconstructed the entirety of his body from scratch to escape death.

Believing that the NPCs still needed tuning, Stark ran a beta trial, in which the beta testers had to explore the eScape trying to tell apart dozens of Stark Unlimited's friends and family from the NPCs. One of the people that took part on the beta test was Jocasta. The trial was interrupted by Jocasta's boyfriend Aaron Stack, who opposed the eScape and deemed it an appropriation of robo-culture. He was faciliated access to the platform by the Controller, who intended to use Aaron as a scapegoat to cover his own tampering with the eScape. Aaron endangered the integrity of the eScape's systems, shutting out both users and NPCs. Being the last beta tester standing, and with Tony in Aaron's grasp, Jocasta shut herself out, concluding the beta test and logging out all remaining participants. Aaron was successfully incriminated for the Controller's own data theft, but Stark decided not to press charges since Aaron's assault helped get the program's bugs out.[2]

The Controller's hacking into the eScape's network damaged Motherboard, the virtual world's operating system which was an A.I. modeled after Tony Stark's adoptive mother Maria Stark.[3] When the eScape exited beta testing and the project went live, Motherboard had the terms of service enforcer A.I. Arsenal start banning from the system thousands of players every minute, though many of them were actually rightfully booted for problematic behavior. When Iron Man attempted to investigate the issue, his mother Amanda Armstrong followed him to the eScape to confront him about personal issues. Motherboard had Arsenal attack Amanda[4] and send her to a secret zone modeled after the Stark Mansion to contend against her for Tony's affection.

At the same time, the Controller contacted the booted players, offering them a chance to re-enter the game and wreck havoc. He additionally had tampered with the design of the eScape interface, enthralling the logged-in eScapers and including a fail-safe that caused irreparable brain damage if the mask was forcefully removed. The villain had additionally allied himself with Baintronics and used one of their manufacturing and fulfillment centers to send all the relogged players real-life weapons, causing them to unwittingly become a danger to the general public, rampaging through the streets armed. Tony Stark managed to get regular users to log off before the Controller stepped in, but the amount of eScapers on the loose rounded in the thousands.[5] When Iron Man and his allies went after the Controller, he was leeching energy off the eScapers to gain power and grow to an immense size. In the middle of battle, Motherboard hijacked Tony's armor and turned it into a VR rig, forcing him into the eScape and brainwashing him to return to his days of carefreeness so that he could live out an idyllic life in the virtual world.[6]

Iron Man had previously enlised Machine Man's assistance to investigate the issues with the eScape, and he helped Amanda reach out to Tony and snap him out of Motherboard's influence.[3] Motherboard attempted to placate Tony, warping reality to offer him scenarios to live out, eventually resorting to brainwashing him again, turning him into a child with no memories of Amanda. In the meantime in the real world, Tony's ally Andy Bhang had managed to create a blocking signal to counter the Controller's influence, and all users were forced out of the eScape. Tony managed to resist Motherboard's further manipulations and attempts to placate him by warping reality to her whim, and made use of the limitless potential his mind could tap into inside the eScape to conceive the Godbuster Armor and destroy Motherboard, thus shutting down the eScape.[7]

During the robot revolution, Stark joined the A.I. Army, a contingent of artificial life-forms fighting against oppression.[8] He reformatted the eScape into a new virtual, holographic realm called the Thirteenth Floor.[9] When Tony faced his unhinged brother Arno Stark to stop him from enslaving all of humanity to fight a non-existent Extinction Entity he was convinced was real, Tony encased Arno in his Virtual Armor, submerging him in a simulation within the realm that used to be the eScape in which the Extinction Entity was real and he managed to defeat it.[10]

Like this? Let us know!
Retrieved from "https://marvel.fandom.com/wiki/Project_eScape?oldid=5820584"
Community content is available under CC-BY-SA unless otherwise noted.