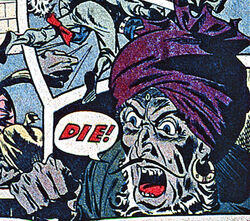 The Prophet of Hate was a legendary man in India during some undisclosed period of time. He hated Caucasians and encouraged his people to rise up against them. Before his death, he vowed that he would return to life once again and rally his people together to eliminate the "white menace" from his land. Following his death, his body was placed in a specially built tomb along with a golden sword that would prove his claims of resurrection later.

By 1945, members of the Imperial Japanese Army learned of this legend and had one of their spies pose as the resurrected Prophet of Hate in order to trick the people of India to following his cause and attack Allied Forces who were in the area. To prove his "power", the man posing as the Prophet had one of his minions use a nearly invisible bull roarer to strangle his targets making it appear that the "Prophet" was killing them with his own willpower.

Before they could mobilize an attack, Sgt. Mike Duffy attempted to fight the Prophet in an attempt to make his girlfriend back home view him as a hero. Duffy was instead overpowered and tossed into a prison cell to be executed later. When Captain America and Bucky came searching for the truth behind the supposed "resurrection" of the Prophet, they too were captured and locked in the same cell as Duffy. The trio broke free, and clashed with the Prophet of Hate and his minions. During the fight, Duffy was knocked out and the Prophet's "powers" were exposed as a hoax when Bucky revealed the assistant with the bull roarer hiding in the shadows. Captain America then easily bested the Prophet in combat, exposing him as a Japanese spy.

Realizing that they were tricked, the "Prophet's" former followers assured Captain America that he would face death for his crimes.[1]

The Prophet of Hate carried a sword. He had an assistant use a nearly invisible bull roarer to strangle his victims giving the illusion that he could kill people with his thoughts.

Like this? Let us know!
Retrieved from "https://marvel.fandom.com/wiki/Prophet_of_Hate_(Earth-616)?oldid=4657912"
Community content is available under CC-BY-SA unless otherwise noted.