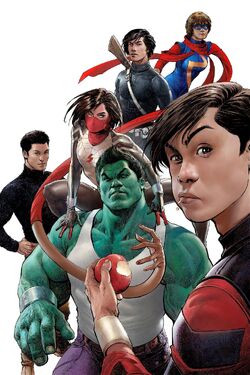 Origin
A group of Asian-American heroes who come together to protect a group of civilians from a dastardly alien abduction.

The group of heroes that would become known as Protectors first met during a charity event to raise awareness for Asian-American bone marrow donation held in Manhattan. The group became fast friends and decided to hang out in Koreatown for the night. Their evening was interrupted by the arrival of the Imperial Guard of Seknarf Seven.[1]

Even though the invaders were easily dealt with, the fight turned out to be a distraction which allowed the aliens to plant in the scene several spears that teleported the portion of ground the heroes and numerous bystanders were standing on, namely Herald Square, light-years away from Earth and close to Seknarf Seven. When the prince regent of Seknarf Seven Phalkan revealed his intention to use the individuals abducted as a food colony, the heroes decided to officially band together as a team to defend the innocent people trapped with them, becoming their Protectors.[2]

After Phalkan gave the humans six hours before he returned to take three of their numbers, they started to device a plan to fight back. While Arnie Kovac, Zee Zee Ahmed, Jake Oh and Amadeus Cho tinkered with the devices that provided atmosphere and gravity to the piece of floating land, the rest worked on retrofitting a van into a bunker for the children and creating Molotov cocktails.

The aliens returned early, having figured out that the humans were up to something. The Protectors fought back, damaging Phalkan's ship with the Molotov's and striking at his Imperial Guard, which prompted Phalkan to disable the gravity generator. Phalkan then gave the humans five minutes to present the offering or he would shut down the atmosphere generator. Amadeus, Jake and Jimmy Woo offered themselves. However, their offering turned out to be a ruse to catch the aliens off-guard. The humans had managed to repurpose energy from one of Phalkan's blasts to disrupt the shielding that kept Cho from Hulking-out, and had also gained control of the life support devices. After turning back on life support, they confronted the Imperial Guard.[3]

The Imperial Guard focused their efforts on taking down the Hulk, but their armors were fried when he unleashed a blast of gamma radiation after reaching the necessary level of anger. With the villains hindered, the rest of the humans started to fight back. Jimmy Woo even got close to killing Phalkan. Hulk stopped the fight, arguing they shouldn't stoop to their level. Alpha Flight forces subsequently arrived, after having received an S.O.S. from Woo earlier, and arrested Phalkan and the Imperial Guard.

The civilians were returned to Earth in Alpha Flight's ships, and Amadeus continued working on the teleported spears until he managed to teleport Herald Square back to Manhattan.[4]

Eventually, due to their heroic actions, Jimmy Woo chooses the Protectors to join his team, The Agents of Atlas. [5]

Retrieved from "https://marvel.fandom.com/wiki/Protectors_(Earth-616)?oldid=5549758"
Community content is available under CC-BY-SA unless otherwise noted.