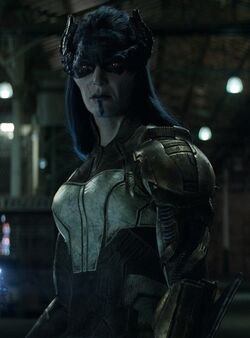 Proxima Midnight was a member of the Black Order. She and the others members assisted Thanos in his goal to gather the six Infinity Stones with the objective to kill half the population of the universe as a means to bring balance. After Thanos obtained the Space Stone from Loki, they were sent to Earth aboard Q-Ships.

She and Corvus Glaive had attacked the bearer of the Mind Stone, Vision, in Scotland. They were forced to retreat by Steve Rogers, Scarlet Witch, Black Widow and Falcon.

After the Avengers took Vision to Wakanda, she and Cull Obsidian led an army of Outriders in an assault against the small nation before Corvus Glaive joined the siege. Proxima Midnight was killed after Wanda Maximoff launched her into one of her army's own vehicles and she was mauled.[1]

Like this? Let us know!
Retrieved from "https://marvel.fandom.com/wiki/Proxima_Midnight_(Earth-199999)?oldid=6074576"
Community content is available under CC-BY-SA unless otherwise noted.