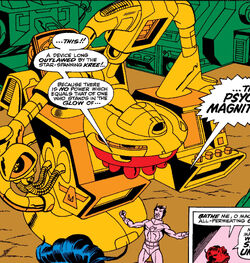 Machine constructed by the Kree that can bestow superhuman powers on living humanoids. Its use enhanced the strength of Captain Marvel, Carol Danvers, Doctor Minerva, and Captain Atlas. It was eventually destroyed during a fight between Ms. Marvel and Kerwin Korman and Doomsday Man.[3]

After some years, Dr. Lawson rebuilt the Psyche-Magnitron into version 2.0 which instead of granting powers it would take them away, planning to use it on the Kree. During the fight between him, Captain Marvel and Ms. Marvel, and Starforce Blue, the Psyche-Magnitron was destroyed again.[4]

Retrieved from "https://marvel.fandom.com/wiki/Psyche-Magnitron?oldid=5837870"
Community content is available under CC-BY-SA unless otherwise noted.