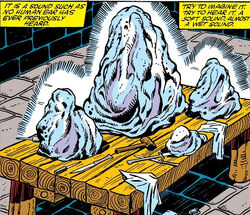 Psychic Clay is a mysterious substance used by the Puppet Master. Through intense concentration, he is able to control the physical actions of anyone after whom he models one of his puppets. How he did this was never adequately explained other than he used some type of special radioactive mixture.

The clay he used in this mixture was magical, slightly radioactive, and came from a remote area near Wundagore Mountain, Transia, site of the prison of the elder god Chthon. The clay cannot control the actions of essentially mindless creatures, or control beings with supremely strong will-power. It's control is limited to one person at a time, and the degree of control decreases with the distance from the person controlled.

In this series the Psychic Clay was hit from a fragment of the same space station the Fantastic Four were in when they got their powers. After the cosmically irradiated platform debris adversely effects it, Puppet Master discovered he can manipulate the person of whoever he sculpts by simply withholding the clay.[2]

Retrieved from "https://marvel.fandom.com/wiki/Psychic_Clay?oldid=4733182"
Community content is available under CC-BY-SA unless otherwise noted.