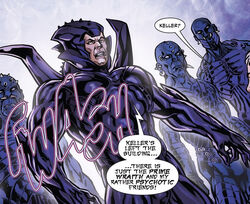 The Techno-Wizards Mys-Tech summoned Demons to possess robot bodies to wreck havoc upon Earth, but they remained not ready for operation. After Mys-Tech failed the demons were trapped in the disabled robotic bodies for years. After their activation they attacked Darkmoor during the English Revolutionary War and one of them begged the heroine Dark Angel to free them through killing them. It turned out that her father Ranulph Haldane constructed the creature Psycho-Wraith Prime who defeated her with the help of Mephisto.[1]

Like this? Let us know!
Retrieved from "https://marvel.fandom.com/wiki/Psycho-Wraith?oldid=5597247"
Community content is available under CC-BY-SA unless otherwise noted.