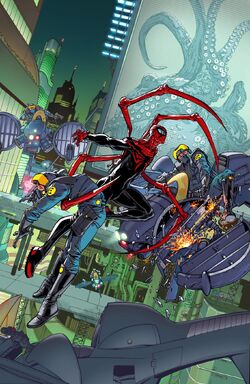 Public Eye Unlimited,[1] commonly known as Public Eye, was a private police force owned and sponsored by Alchemax International.[2] Alchemax's Vice President in charge of the Public Eye[6] was Darryl King, better known as Fearmaster, who oversaw the organization's activities from his executive suite at the Alchemax Building.[1] Public Eye Unlimited was headquartered in a Nueva York skyscraper, where its day-to-day operations were instead supervised by high-ranking police officers such as the Chief[8] and Commissioner Bennelli.[1]

When a vigilante known as the Punisher started to protect the citizens for free by eliminating the criminal organizations in Nueva York and killing their members, Public Eye's Chief hired Special Agent Jake Gallows to hunt down and capture the vigilante, unknowing that he secretly was the Punisher.[8] Later, Alchemax Vice President Fearmaster had both the Public Eye and the criminal organization known as Cyber-Nostra cooperating in order to take down the Punisher.[1]

The Public Eye were sent out to guard Alchemax Building when it was plagued with numerous time distortions. They were aided by their enemy, Spider-Man, whom left the Fly-Boys once the imminent threats disappeared back into the timestream.[3]

When Superior Spider-Man was time-displaced to Nueva York, he was cornered by a pair of Fly-Boys. They mistook him for their Spider-Man and retreated in response to his willingness to fight rather than flee. In the following days, Tyler Stone ordered the Public Eye to take down the time-displaced hero, but were unable to stop him from raiding Alchemax facilities.[9]

During a battle between Daemos and the Spider-Army, the Public Eye attempted to intervine, but were not match for Daemos.[4]

When Victor von Doom successfully became the President of the United States by right of revolution, he disbanded all the public and private police forces in order to gather their members into a single federal entity, known as SHIELD.[10] Jake Gallows, the Punisher, was then appointed as SHIELD's Head and Minister of Justice and Punition.[11]

Like this? Let us know!
Retrieved from "https://marvel.fandom.com/wiki/Public_Eye_(Earth-928)?oldid=5549776"
Community content is available under CC-BY-SA unless otherwise noted.