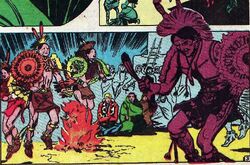 The Puebloan people, as named by early Spanish explorers of North America, consist of various Native American tribes including the Hopi, Taos, Acoma and Zuni people. Their ancient history is mostly a mystery due to conflicting stories from the various tribes, but it is believed that they originated from the Ancient Pueblo Peoples (also known as the Anasanzi to the Navajo) who existed in the southwestern United State as early as the 13th Century[1].

Presumably, their history on Earth-616 mirrors that in the real world.

During the days of the American Frontier, the various existing Pueblo tribes had interactions with the gunslinging heroes of the age, either as friend or foe depending on the tribe and the circumstances of the encounter.

One such tribe of Pueblos, led by Red Willow had befriended the outlaw hero Kid Colt. They had asked Kid Colt to help them fight off a tribe of Apaches who raided their village every year during harvest time. This time around, the Apaches were armed with guns by an outlaw named Ryker. When Kid Colt helped the Pueblos defend their home, Ryker and his men posed as the Manidoog known as the Black Ogre, whom the Pueblo feared. Kid Colt exposed this hoax, but was shocked when the real Black Ogre appeared and slew Ryker and his remaining men.[2]

The various Pueblo tribes still exist to this day.

Retrieved from "https://marvel.fandom.com/wiki/Puebloan_Peoples_(Earth-616)?oldid=4881044"
Community content is available under CC-BY-SA unless otherwise noted.