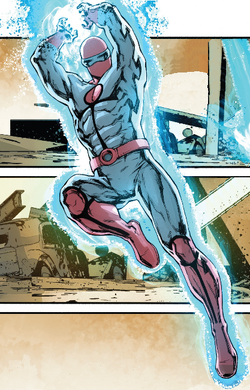 Pulsar had followed Gladiator to a town in Colorado where they learned the location of where Star-Lord was last seen. Gladiator tasked Pulsar to find Quill at the Rice-Eccles Stadium as he was the Church's fastest member and was to alert the others once Pulsar had found him.[1]

Pulsar followed a couple of resistance fighters back to their base and intercepted their transmission for the coordinates of where Quill and the other Guardians were at. Reaching the town of Owlsley Nest, Pulsar launched a large concussive blast at them blowing up Guardians and the entire town.[2]

Pulsar was shown only doing damage to the town and killing its inhabitants while Quill and the Guardians were able to stay out of the line of fire. Gamora grabbed Quill as Pulsar began blasting his shock waves towards the ground. Pulsar's suit was able to handle the gun fire from Rocket's blaster but became torn when Drax picked up an ax and penetrated it, releasing his energy from from within.

Pulsar was then shot in the back, knocking him off course and into the window of a large warehouse. He then launched a huge energy blast which incinerated the entire building, but the Guardians were protected by Mantis' telekinetic shield. Pulsar began chasing Quill through the streets, but the Guardians set up a trap by having Pulsar fly into a net of barbwire, which ruptured his suit beyond repair.

He then sacrificed his life by projecting his remaining energy into the vastness of space to New Xandar as a beacon for the Matriarch to learn the location of Quill so she could tell her god Galactus.[3]

Seemingly those of the Impulse of Earth-616.

Seemingly those of the Impulse of Earth-616.

Like this? Let us know!
Retrieved from "https://marvel.fandom.com/wiki/Pulsar_(Earth-21923)?oldid=5530062"
Community content is available under CC-BY-SA unless otherwise noted.