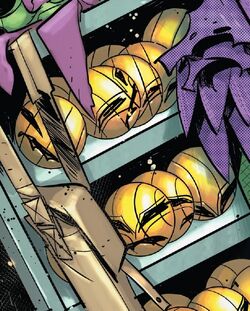 The Green Goblin first experimented with his notorious Pumpkin Bombs while in combat against Spider-Man and the Human Torch at the Avenue Dinner Club.[2]

A while later, the Green Goblin shot some smoke bombs against Lucky Lobo's men to confuse them.[3]

The Green Goblin then tossed stun bombs against the Crime Master, who was hidden by the smoke exhausted by the Goblin Glider.[4]

A short time later, he concocted a gas Pumpkin Bomb to prevent Spider-Man's Sense from working.[5]

Goblin also used the Pumpkin Bombs as stunners, as well as a special anti-Spider-Man explosive.[6]

He later used another gas Pumpkin Bomb against Spidey, emitting vapors that made Spider-Man's head begin to spin. He also threw some Pumpkin Bombs at him to keep him off-balance, in order to safely escape on his Goblin Glider.[7]

During their next fight, the Green Goblin used some glue bombs to stun Spidey, and then hurled him a new kind of Pumpkin Bomb: one that soaked through his costume, and took away Spider-Man's ability to adhere to any surface.[8]

A Pumpkin Bomb was later used by Hobgoblin to blow up a building in Brooklyn where he was hiding a numer of previously abducted children and parents.[9]

A box of unused Pumpkin Bombs were later found by Spider-Man in the abandoned Osborn Industries building.[10]

Hobgoblin used several Pumpkin Bombs against the Scarlet Spider to collapse the whole ceiling and bury him underneath.[11]

He also hurled a Pumpkin Bomb against Kaine, who was eventually saved by the Scarlet Spider.[12]

The Pumpkin Bombs were also used by the new Green Goblin against Firefist.[13]

A short time later, Hobgoblin hurled a Pumpkin Bomb that exploded and destroyed the factory where Cell-12 was in.[14]

When he kidnapped Spider-Man, Norman Osborn used a gas pumpkin specially designed to interact with his blood chemistry, making Spidey disoriented and weak.[15]

Several Pumpkin Bombs were used to blow up the warehouse on the East River where Spider-Man and The Punisher were confronting Shotgun.[16]

The Green Goblin construct used another Pumpkin Bomb to blow up the Brooklyn Bridge and block the police.[17]

A while later, pumpkin bombs were used against the guards who were protecting Roderick Kingsley from being kidnapped.[18]

Hobgoblin then employed a gas-goblin to stop Spider-Man from rescuing Daniel Kingsley.[19]

Some Pumpkin Bombs were left behind by the Green Goblin to leave no witnesses.[20] He later threw a pumpkin bomb to let Spider-Man and Aunt May escape his mansion in Upstate New York.[21]

When the Green Goblin was finally defeated by Spider-Man, one last Pumpkin Bomb, more powerful than ever before, detonated just below the Daily Bugle Building.[22]

When Norman bonded with Carnage symbiote,[23] he was capable of creating bombs augmented with symbiote biomass - letting him speak through them. These Carnage-Bombs didn't set off Spider-Man's Spider-Sense, and could bite into targets with their fanged jaws.[24]

Retrieved from "https://marvel.fandom.com/wiki/Pumpkin_Bomb?oldid=6030628"
Community content is available under CC-BY-SA unless otherwise noted.