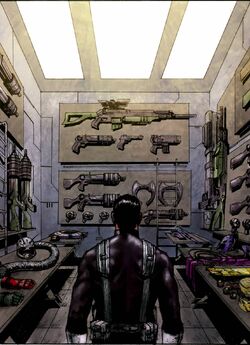 Frank Castle as the Punisher has utilized various weapons and equipment throughout the years. Working with tech genius David Lieberman aka Microchip, together they have come up with various pieces of technology to help him in his war on crime.[1]

Frank Castle mostly used conventional firearms, explosives, and knives. He collected most of his weapons from dead criminals. He keeps his equipment in safe-houses across the country.[citation needed] He cleans and services his weapons every other morning. He liked to use an M60 machine gun a weapon he used in the Vietnam War, it was nicknamed the "Hog"[citation needed], along with an Uzi 9mm.[citation needed] His former military weapon of choice was a standard issue M16A1.[citation needed] Due to his extensive use of the rifle since war, Castle used an M16A3 fitted with an M203 grenade launcher, even though he hates 5.56 Ammunition. His backup firearm is a Derringer D32. His chosen type of knife is a Gerber Mk2.[citation needed]

Castle chose not to utilize any costume outside of a black shirt with a white skull splashed across the front. His other clothing, which sometimes included combat boots, blazers, leather jackets, trench coats, Kevlar vests and body armor, black battle dress uniforms, and camouflage outfits was worn for the sake of protection or camouflage in urban and wilderness areas.[citation needed] Each tooth of the skull was actually spare ammunition for firearms.[4] Microchip helped create Punisher's Exo-Armor, a battlesuit which he used against the Reavers.[5]

Punisher once harbored a Klyntar-lite exosuit based on the alien entity known as Venom created by Stuart Clarke.[6] This Venomech System exomantel dubbed the Synthiote; simulated all the protective, reformulating and enhancement properties naturally bestowed by an alien Klyntar. Minus their recuperative biomass as it lacked the self-perpetuating ability to restore its substance with every blow taken, what it did have was the ability to magnify Frank's physical abilities as well as change appearances in order to generate guns out of it's artificial Constituent-Matter.[6]

Microchip created for him the Battle Van[7] along with other armored vehicles such as the The Fury [8], motorcycles, helicopters and other aircraft and even a robot called "Dalek".[9]

When Stuart Clarke became Castle's personal hacker they gained access to a cache of S.H.I.E.L.D. technology and confiscated weaponry such as the Satan Claw [12] He has been using a S.H.I.E.L.D. Flight Pack for many years.[13]

When he began working with Henry Russo they began to collect custom gear from both heroes and villains such as Pumpkin Bombs[14], a Goblin Glider,[14] Pym Particles,[15] Ant-Man's Helmet,[15] Doctor Octopus' Tentacles,[16] Hawkeye's Bow and Trick Arrows,[17] Captain America's Shield,[17] etc. He also later stole a prototype Iron Man Armor and booby-trapped it to snare Iron Man after blasting Spider-Man and flying Rachel Cole-Alves to safety.[18]

Some time after the Secret Invasion wherein Norman Osborn ascended to power, Castle added some alien artillery to his vast arsenal; e.i. a Skrull Sniper Rifle which can make an in impressive kill shot from several miles away.[19]

As part of the Thunderbolts, Castle also used Blaze's Hellfire Shotgun,[20] Uru shivs borrowed from Elsa Bloodstone,[21] spirit guns reputedly owned by Carter Slade,[21] and Mephisto's blade.[21] Other colorful munitions which fell into his hands over the years include the War Machine Armor loaned to him by Nick Fury.[22] Later adding Consecrated Hellfire Rounds for battling Ghost Riders as well as a special composite alloy knife made of a Vibranium/Adamantium mesh sharp enough to rend even the herald's of Galactus.[23]

Like this? Let us know!
Retrieved from "https://marvel.fandom.com/wiki/Punisher%27s_Arsenal?oldid=6433313"
Community content is available under CC-BY-SA unless otherwise noted.