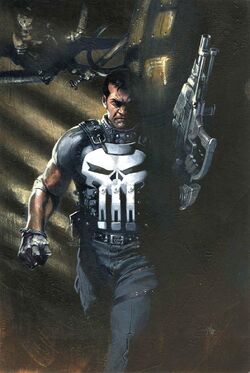 Interesting-- that gunman must be wearing Kevlar armor-- thin, flexible, yet it protects him from an onslaught of bullets!

Initially, Castle wore a full-body suit of kevlar with a white skull splashed across the front.[1]

Over the years, he traded it for Kevlar vests and body armor with the same symbol, often using a leather jacket or trench coat over them.[2]

Castle started to wear a T-shirt with a white skull symbol, the last gift his son Will gave him before being killed. He also sprayed the same symbol over the body armor he wore while killing criminals.[3]

Castle found a heavy body armor inside the arsenal retrieved from Ray Schoonover. When he returned to his house, he sprayed a white skull symbol over it.[4] Castle later destroyed the suit, after he seemingly had killed off all the parties involved in his family's murder.[5]

Using another bulletproof vest he stole from the Greek mob,[6] Castle decided to adopt the white skull symbol once again. Micro called it a "Memento Mori". Castle intended for it to strike fear into Billy Russo and his infiltration team when they infiltrated his safehouse, but Billy wasn't there.[7] Castle wore the suit once more in his duel with Billy at the Central Park Carousel.[8]

Retrieved from "https://marvel.fandom.com/wiki/Punisher%27s_Suit?oldid=5994093"
Community content is available under CC-BY-SA unless otherwise noted.