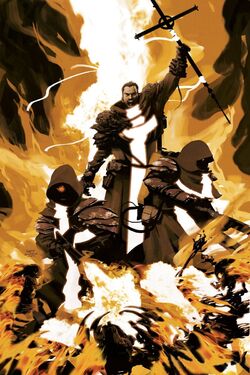 After William Stryker killed his family, he started a mission to rid the world of all mutants. Stryker knew he could not do this task on his own, so he traveled around and recruited many mutant hating people to join his mission. Stryker was later stopped and sent to prison, but his followers, now called the Purifiers, kept on going.[5]

William Stryker later returned as a major player right at the start of M-Day. Deeming the sudden massive reduction in number of the mutant population a sign of God, he went on TV and declared "He made the first step and now we have to take the next".[citation needed]

With the help of Icarus, one of the Xavier Institute's students, he caused a bus to explode, killing about 1/4th of the de-powered students from the academy. Then he planned the assassination of Wallflower, ordering one of his Purifier snipers to shoot her in the head. Next he tried to kill Dust. X-23 became suspicious and went under cover as Dust, getting shot herself. The deaths of Wallflower and Dust were Stryker's prime objectives, as he had been informed by Nimrod that both girls would be fundamental in the destruction of the Purifiers. Finally he attacked the institute with his Purifiers, killing Quill, leaving Onyxx and Cannonball critically wounded, and hurting Bishop, Emma Frost and other students. After Stryker's Purifiers were defeated, he was killed by the enraged boyfriend of Wallflower, Elixir.[citation needed]

The Purifiers would later manage to acquire Stryker's remains from the authorities.[citation needed]

The Purifiers attempted the kill the first mutant baby born after M-Day. They attacked the Marauders in Cooperstown, Alaska, killing Blockbuster and Prism, but failed to kill the baby.[6] After being infiltrated by Rictor, the group was attacked by the New X-Men, who were seeking to prove their worth to the X-Men. With the assistance of the Reavers, the New X-Men were nearly massacred, barely escaping.[7][8]

Bastion and the Human Council

Following those events, they managed to find and resurrect Bastion, who then harvested the remains of Magus and injected them into several living and dead known mutant killers (Donald Pierce, Leper Queen, William Stryker, Stephen Lang, Cameron Hodge, Graydon Creed, and Bolivar Trask), turning them all into Technarch/human hybrids and "resurrecting" the dead members, much to Matthew Risman's objections. These people were then made into an inner circle of leadership for the Purifiers.[citation needed]

Meanwhile, the Purifiers used a brainwashed Wolfsbane to attack Archangel and obtain his wings, which, even though they appeared to be fully organic, were still composed of Apocalypse's techno-organic strain. Using the sample, the Purifiers employed a scientist named Adam Harkins to duplicate the strain and use it to create an elite team of Purifiers called "the Choir". After learning that Bastion was planning to remove Risman from the group's leadership, Risman led the Choir against Bastion's Purifiers in an attempt to destroy Bastion and the reanimated remains of Stryker, considering them unholy. Archangel later attacked the Purifiers in an attempt to reclaim the wings that were stolen from him, killing every member of the Choir. During that point, Matthew Risman was shot in the head by X-23 around the point where Matthew tried to kill Bastion.[citation needed]

Following the Serpent's War, Purifiers were seen tracking Hybrid in Los Angeles. When the Avengers Academy came, they tried to explain the threat of their target, but were all killed by the Dire Wraith/mutant hybrid before making the Avengers believe they committed suicide to avoid capture.[1]

After the conflict pitting the X-Men against the Avengers, the Purifiers, now equipped with heavily armored and armed exoskeletons, attacked the transport truck carrying Emma Frost, but they were defeated by the New Avengers members (Luke Cage, Mockingbird, Daredevil, and The Thing) escorting it. They were then arrested by the San Francisco Police Department. Though unsuccessful, their attack managed to make Luke Cage quit the Avengers and focus on his family.[2]

Later, the same heavily equipped Purifiers targeted X-23 in Miami, only to be defeated by Cyclops' X-Men and the time-displaced X-Men.

The X-Men then tracked those Purifiers, locating them in Ocala, Florida. Attacking them, they were all taken down by the Purifiers' leader Jason Stryker.[9]

Like this? Let us know!
Retrieved from "https://marvel.fandom.com/wiki/Purifiers_(Earth-616)?oldid=6452127"
Community content is available under CC-BY-SA unless otherwise noted.