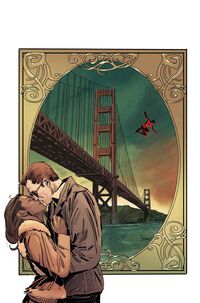 Purple is the fourth named story arc in Daredevil Vol 5.

Matt and Kirsten McDuffie find two the Purple Children, illegitimate children of the Purple Man, who tell them that their father has kidnapped the others and is using them for some sort of power-boosting machine.

This machine is strong enough to overcome Daredevil's will and, when Daredevil confronts the Purple Man, he is brought under his control. Having moved beyond making people do generally immoral things, the Purple Man asks Daredevil what exactly the worst possible thing he could do is

In Daredevil asks the Purple Man to have everybody, heroes, villains and civilians, wreak havoc upon the streets. When asked what he would do in this scenario, Daredevil simply says "nothing".

This response is not enough for the Purple Man, but he is stopped in his outrage and Daredevil rescues the Purple Children. As an act of gratitude to Daredevil, the children use their father's machine to erase the world's memory of Daredevil's identity, leaving only Father Jordan and Foggy Nelson, who Matt told soon after he realized what was happening, know who he is.

Retrieved from "https://marvel.fandom.com/wiki/Purple?oldid=4198725"
Community content is available under CC-BY-SA unless otherwise noted.