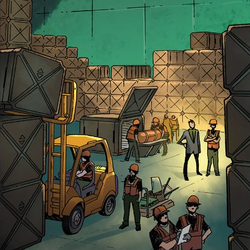 Qeng Enterprises is the company to which Stark Industries sold the old Avengers Tower located at 58th and Broadway in Manhattan.

Tony Stark sent Vision to make a final pass through the building to be sure they hadn't left anything behind,[3] and it was during this time that Qeng Enterprises' CEO, Mr. Gryphon, secretly altered the Synthezoid's programming, implanting an enemy within the hero community as part of a plot to create a "New Qeng Dynasty" over which to rule.[4]

When Mr. Gryphon was supervising a walk-through of the building, an alien warlord materialized within the skyscraper, having used a cellular reconstitution process to transport his consciousness to Earth. Mr. Gryphon recognized the language Warbringer was speaking, and proposed becoming his ally; meanwhile, an eavesdropping Spider-Man listened as Warbringer was ultimately convinced to gather the scattered pieces of an ancient artifact, but Mr. Gryphon teleported away after the hero's presence was uncovered and the resultant explosion from Warbringer's attack caught the attention of Iron Man and Captain America.[5] He later reappeared on the scene, after the group of heroes had failed to stop Warbringer, scolding them for property damage to his newly acquired building.[6]

After Warbringer got the heroes off Qeng Enterprises' trail, Mr. Gryphon returned to help him gather the final piece of the relic from a cemetery on Hart Island. Mr. Gryphon informed the warlord of the object's ability to open a portal for an awaiting Chitauri armada; however, the heroes managed to steal the artifact and force Warbringer through the portal, trapping him on a future Chitauri Prime as they destroyed the relic soon after, thwarting the villains' plans, and compelling Mr. Gryphon to regroup and focus on dismantling the newly reformed Avengers.[7]

In furtherance of this endeavor, Qeng Enterprises hired Radioactive Man to rob Manhattan's Federal Reserve, damaging the older team members' faith in the youth.[1] Mr. Gryphon next employed Cyclone to attack Atlantic City in the ongoing effort to continually sow discord within the Avengers, using the corrupted Vision to further drive a wedge between the various members.[2]

The strife ultimately culminated in Ms. Marvel and Nova being kicked off the team just prior to an attack from Equinox at High Line Park, during which Mr. Gryphon revealed his connection to Kang the Conqueror, summoning multiple Equinoxes from various alternate timelines.[8] Realizing that something was very wrong with Vision, Ms. Marvel and Nova rushed to the scene and helped Spider-Man incapacitate Equinox, thus momentarily preventing Mr. Gryphon from summoning future iterations and allowing Iron Man time to reboot Vision's systems, freeing him from Qeng Enterprises' control. Thor then ended the battle by striking a time-displaced Mjolnir against her own and creating a temporal paradox into which Mr. Gryphon was drawn.[4]

Retrieved from "https://marvel.fandom.com/wiki/Qeng_Enterprises_(Earth-616)?oldid=5549816"
Community content is available under CC-BY-SA unless otherwise noted.