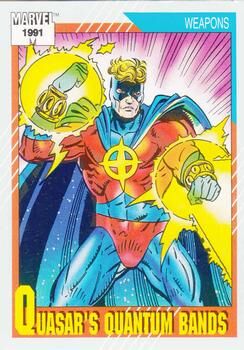 Designed by Eon for the Protector of the Universe. Eon would routinely bestow the bands on each new agent he chose to act as Protector.[1]

The Nega Bands were created by the Supremor based off of the Quantum-Bands, which are one of a kind. The Kree know the Quantum Bands as "the Power Bands of Rinn".[2]

The bands draw energy from the Quantum Zone, the realm of potential energy from which all actual energy in the Marvel Universe derives. The Bands give their wearer control of the electromagnetic spectrum. The Bands can be programmed to perform certain automatic functions, such as detecting energy, energy manipulation, creating powerful energy constructs, shielding the wearer when they leave an atmosphere into space, etc.[1][3]

The wearer can "Quantum Jump" opening a wormhole in spacetime allowing them to travel vast distances.[1]

The Bands are able to augment the wearer's physical strength and durability. However, it seems that only Thelius was capable of doing so.[4]

The Bands also link to Eon or currently Epoch. [1]

The Bands can bend light around themselves to appear invisible, allowing the wearer to go around unnoticed.[5] They can also make their normally visible constructs invisible.[6] It is not known if the wearer could extend this to allowing themselves to be cloaked or allow image induction, but it is theoretically possible.

The Quantum Bands have no control over magic or telepathy. However, Quasar was able to make himself immune from mental control by some means.

Like this? Let us know!
Retrieved from "https://marvel.fandom.com/wiki/Quantum_Bands?oldid=6429926"
Community content is available under CC-BY-SA unless otherwise noted.