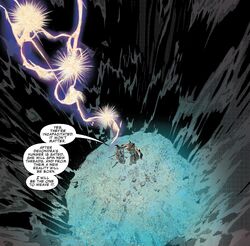 The Quarry of Creation is a strange and unknown realm located at the very edge of the universe.[1] At its bottom laid a virtually impentrable barrier that served as an access to the primordial universe where Celestials resided, guarding a deposit of countless of Infinity Stones which they delivered to different realities across the Multiverse.[3]

Over the course of a million millenia, the Quarry of Creation became a place where ancient gods went to die. It was guarded by The Coven, a trio of powerful witches who fed on the souls of said gods.[2] As the corpses of gods accumulated, the Quarry of Creation became known as the God Quarry.[4] In modern times, the God Quarry became a sought-after source of powers. Those who entered the God Quarry willingly were submitted to a trial for their very soul. Should they pass, the power held by the Quarry was theirs to take; however, should they fail, they would be frozen for eternity in its ageless walls.

In order to recover his lost power to defeat his son Thane, Thanos ventured into the God Quarry.[2] He was forced to experience an illusion where he was a member of the Avengers and a celebrated hero of Earth. Eventually realizing, that what he was experiencing wasn't real at all, Thanos rejected being trapped in the illusion and fought his way out of it, acquiring the power he sought.[5] During their subsequent fight, Thanos and Thane were sucked into the black hole that led to the God Quarry,[6] where the Phoenix Force was stripped from Thane by the Coven. Thanos defeated Thane, and condemned him to a life of misery trapped inside the God Quarry.[7]

As he was investigating the libary of Omnipotence City to find an explanation for his constant misery, Loki found that pages had been mysteriously torn from a book of a tale that involved him and the God Quarry.[4] Loki traveled to the God Quarry searching for answers, but The Coven self-combusted announcing the arrival of "Infinity's end." Afterwards, a counterpart of Loki from an adjacent universe was blasted through the barriers of reality into the God Quarry. Before returning to his universe, Loki's counterpart warned him that he would need the Infinity Stones to breach into the "original universe" through the Quarry of Creation.[8]

Loki sought the wielder of the Infinity Stones, Gamora, and she learned of Loki's journey to the God Quarry by reading his mind. Intrigued by her inability to see past the bottom of the Quarry, Gamora set out to investigate it while she waited for Devondra to consume the souls of the entirety of the universe, which she had transformed into Warp World, a pocket dimension within the Soul Gem, where she also banished Loki.[9] Gamora managed to unearth the Quarry of Creation, but failed to destroy the impenetrable barrier below. Her attempts, however, caught the attention of the Council of Watchers.[10]

Assembling Warp World's own Infinity Stones, Loki escaped with the Cosmic Avengers and defeated Gamora. He used the stones to pass through the barrier, and arrived at the primordial universe.[3] He later returned disechanted by his discovery and handed over the Infinity Stones back to the Cosmic Avengers, who used it to leave the Quarry of Creation and return to Warp World.[11]

Like this? Let us know!
Retrieved from "https://marvel.fandom.com/wiki/Quarry_of_Creation?oldid=5835990"
Community content is available under CC-BY-SA unless otherwise noted.