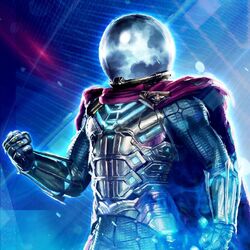 Early Life and the Birth of Mysterio

"Quentin Beck" was a former engineer and specialist in the holographic illusions division of Stark Industries' R&D department,[1][2] but he was fired due to his mental instability, which presented a danger to everyone he worked with. Sometime later, Beck acquired updated technology from various Stark Industries divisions, including the holographic illusions one he had previously been a part of. He used the technology to craft a suit which allowed him to fly and shoot blasts of energy from his gloves.

Following Tony Stark's death in his efforts to defeat Thanos, Beck began plotting to take over Stark's mantle as "Earth's Best Defender" by utilizing the technology he had stolen from Stark Industries and creating illusions of monstrous nature-based creatures called Elementals which he would then show up to stop under the guise of Mysterio. He first put his plan in motion in a small town in Mexico, where he orchestrated an illusion of an Earth Elemental composed of sand and rock. To his surprise, Nick Fury and Maria Hill arrived to case the scene, whereupon he warned them away and proceeded to destroy the creature using his own illusions. Fury and Hill, after being told by Beck that the Elementals would continue to show up around the world to destroy it, recruited him to help them stop the new threat.

Sometime later, the group traveled to Venice, Italy in order to stop the next Elemental, which struck in the middle of a canal by the Rialto Bridge. Peter Parker made several attempts to stop the creature from causing any damage but was ultimately defeated until Beck showed up and once again destroyed the illusion. Seeing an opportunity in Parker's presence in Europe as a superhero and newly-minted Avenger, Fury attempted to recruit Spider-Man to the cause. Beck told Parker that he hailed from Earth-833, as did the Elementals, and that they were the ones responsible for his family's deaths and the destruction of his planet by attacking specific points across the globe; he explained that Thanos' snap had torn a hole in the fabric of spacetime, allowing the Elementals to come to Parker's Earth and for himself to follow. Despite Fury's appeals for assistance, Parker refused, choosing to return to his European vacation, and left, but not before being gifted with a pair of glasses Stark had left to his successor programmed with the E.D.I.T.H. AI.

Fury subtly redirected the class' itinerary to Prague, however, where Beck had informed them that the next Elemental was "planning" to strike. Fury once again appealed to Parker for help, this time giving him a stealth suit to avoid detection as Spider-Man in Europe. Parker agreed to help this time, assisting Beck in battling a Fire Elemental which erupted later on at a carnival in Prague. Following this battle, Fury and Hill invited Beck and Parker to a base in Berlin to discuss the formation of a new superhero team not unlike the Avengers. Parker rejected this idea, however, and Fury scolded him for not living up to what Tony Stark saw in him as a hero and protégé. Parker left and Beck later found him on a rooftop, where he sat with him and talked, giving him advice on what it meant to be a hero, including that it sometimes meant sacrificing yourselves or those closest to you. Parker, viewing Beck as more worthy than he in shouldering the burden of the mantle of Stark's successor, bequeathed him with the E.D.I.T.H. glasses and returned to his vacation.

Later on, however, Beck discovered that Parker and his friend MJ had determined his true nature as a fraud as they found one of the projectors he utilized to orchestrate the Elemental illusions. Beck, anticipating Parker's intent to reveal this information to Fury, traveled to the base in Berlin and created an illusion of Fury, to which Parker confessed everything, including that he and MJ found a projector containing the yet-unseen Air Elemental. Beck then dispelled the illusion of Fury and attacked Parker, wearing him down with illusions until he was hit by a train. After witnessing a severely injured and weary Parker board the train, Beck redirected it to a prison in the Netherlands and followed the class to their next location, London, England. Here, he sought to kill MJ and anyone else to whom she may have told his secret by creating a massive illusion of the Elemental Fusion, during the course of which he relayed false information about it to Fury, who determined his fraudulent nature as well. Parker soon arrived on the scene, however, having broken out of the prison and tracked Beck to London. Parker used his Spider-Sense to ignore the illusion and regained control of the E.D.I.T.H. AI before hacking the projector drones Beck had been using and ordering them to self-destruct. Beck then battled on the Tower Bridge with Parker until he was shot by a misfired gun and appeared to die.

Beck would leave a legacy, however, having sent doctored footage of the London battle to the New York City media outlet the Daily Bugle in which he framed Spider-Man as the true criminal behind the Elementals and as his murderer, before revealing his true identity as Peter Parker to the world.[1]

Beck was mentally unstable and seemingly somewhat psychotic. He came across as charismatic and likable, though he was also capable of being highly deceptive, tricking just about everybody into believing that he was a hero worthy of being Iron Man's successor by creating and "defeating" his own illusory monsters. He showed little or no compunction about killing when he saw it fit, as he would have willingly killed both Peter Parker and Michelle Jones, along with anyone either of them had shared his secret with. He was also a pathological liar and lied to anyone he needed to in order to attain his goals.

Like this? Let us know!
Retrieved from "https://marvel.fandom.com/wiki/Quentin_Beck_(Earth-199999)?oldid=6074580"
Community content is available under CC-BY-SA unless otherwise noted.