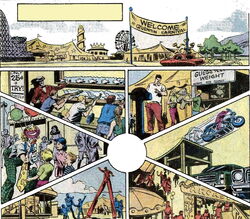 The Quentin Carnival was one of America's more popular traveling festivals, having toured the country for more than twenty years. Owned and operated by Ralph Quentin, the carnival's most alluring attraction was motorcycle stunt driver Johnny Blaze. Although the carnival enjoyed great fame, it was also the target of great discord. On more than one occasion, the carnival became the backdrop of great battles between the mysterious Ghost Rider and various nefarious beings. The Quentin carnival also became a victim to the ambitious efforts of the Circus of Crime.[2]

Another individual who sought to destroy Quentin's efforts was the Freakmaster who manipulated the carnival's financial earnings when he supplanted Johnny Blaze for the cybernetic Steel Wind.[3] Johnny's tenure with the carnival was spotty, as he frequently left to pursue other endeavors. More often than not, he left the carnival so as to protect it's staff from his alter ego as Ghost Rider. After being freed from the Soul Gem,[4] Johnny returned to the carnival where he married his childhood sweetheart, Roxanne Simpson. He and Roxanne had two children whom they raised at the carnival.[5]

Like this? Let us know!
Retrieved from "https://marvel.fandom.com/wiki/Quentin_Carnival_(Earth-616)?oldid=5612063"
Community content is available under CC-BY-SA unless otherwise noted.