The Quiet Council of Krakoa 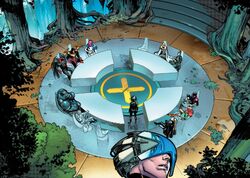 The Quiet Council of Krakoa was the twelve-member governing body tasked with creating and enforcing the laws of the nation-state upon Krakoa.[1]

The Council itself was divided up into four sections named after the seasons: Autumn, Winter, Spring, and Summer. Each section consisted of three members and seemingly represented a different section or hierarchy of mutant society.

Autumn consisted of Professor X, Magneto, and Apocalypse, representing the three largest traditional and historical heads of mutant society. All three had complicated histories with one another due to their varying philosophies on life and human-mutant relations.[2]

Winter consisted of Mister Sinister, Exodus, and Mystique, representing the more zealous, criminal, and morally ambiguous elements of mutant society. Exodus did not particularly like Sinister, threatening him with harm if he spoke to him again.

Spring consisted of the Black King, the White Queen, and initially undetermined Red King, representing the Hellfire Trading Company's interests and the more well-to-do mutants. Frost wielded more clout over the other members of her section, as without her they would not have seats on the council,[2] and she eventually outmaneuvered Shaw to name Kate Pryde to the position of Red Queen.[3]

Summer consisted of Storm, Jean Grey, and Nightcrawler, representing the more empathetic, level-headed, and just members of the X-Men, as well as other factions.

Lastly, an adjunct to the council consisted of Cypher and Krakoa, representing the interests of the entity itself and the needs of the nation as a whole.[2]

The Council's inaugural meeting as a governing body consisted of two objectives: first to draft a set of initial laws for Krakoa and second to implement those laws and determine the fate of mutant criminal and psychopath Sabretooth.

After much discussion and deliberation, often revolving around the complication of mutants such as Sabretooth, the Council decided upon three basic tenets for the fledgling nation: 1) Make more mutants; 2) Murder no man; 3) Respect the sacred land of Krakoa.

Due to Creed's violent nature, repeated and longtime disregard for life and following orders, and the fledgling status of Krakoa as a democratic nation, the Council voted to exile Sabretooth to the unseen depths of the island. As a mutant he no longer fell under the jurisdiction of humanity and therefore could not be released back into the outside world, but neither could he be executed as his death would undermine the Council and Krakoa's legitimacy by violating their new tenants, as well as make him eligible for "resurrection protocols." Long-term, traditional imprisonment within Krakoa was also not an option as prisons were forbidden. His exile therefore would leave him in a stasis-like condition, "alive but immobile... aware but unable to act upon it," the best alternative given all of the factors.

After the end of the meeting, the Council members joined in the celebration taking place upon the island, commemorating the recognition of Krakoa as a sovereign nation under the United Nations.[2][4]

Like this? Let us know!
Retrieved from "https://marvel.fandom.com/wiki/Quiet_Council_of_Krakoa_(Earth-616)?oldid=6189782"
Community content is available under CC-BY-SA unless otherwise noted.