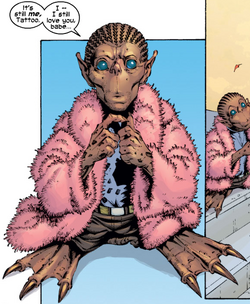 Slick was one of the more popular students of the Xavier Institute, and appeared as a handsome young man. During Cassandra Nova's second assault against the X-Men, Slick and the other students were manipulated into fighting Beast and Wolverine. Slick was freed from Cassandra's control by the Stepford Cuckoos.[2]

While studying at the Institute, Slick began a romantic relationship with fellow student Tattoo. He did not get along well with Quentin Quire, who would become known as Kid Omega. After hearing about the death of the mutant fashion designer Jumbo Carnation, Slick decided to write a song in tribute to him. While practicing some lyrics with Tattoo, Slick was confronted by Quire. Quire used his powers to expose Slick's true form, that of a dwarf-like creature, in front of the other students. Slick was deeply embarrassed by this and his girlfriend Tattoo broke up with him.[3]

Slick was one of many mutants who lost their powers after the event known as M-Day.[4]

None, Slick lost all of his mutant powers on M-Day.

Like this? Let us know!
Retrieved from "https://marvel.fandom.com/wiki/Quincy_Marrow_(Earth-616)?oldid=5828725"
Community content is available under CC-BY-SA unless otherwise noted.