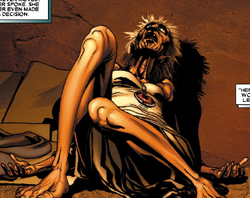 Qwerty was a mutant before M-Day with the power to see the future. When she saw the outcome of all her movements, such as turning on a light switch, she went crazy. She was depowered on M-Day and died. She wrote the book of prophecy found by Delphi and that Masque used to try to start a human-mutant war.

None, Qwerty was depowered due the events of M-Day.

Incapable of functioning as a normal person. Her power made her mind get lost in the chaos of multiple futures. Spent most of her time in what appeared to be a vegetative coma, but really wasn't. Her mind was simply too active to pay attention to her body.

Qwerty's name comes from the arrangement of the first six letters found on a computer keyboard.

Like this? Let us know!
Retrieved from "https://marvel.fandom.com/wiki/Qwerty_(Earth-616)?oldid=3932314"
Community content is available under CC-BY-SA unless otherwise noted.