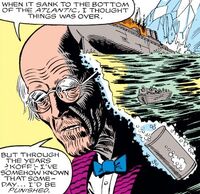 RMS Titanic was a British passenger ocean liner of the White Star Line, that sank in the North Atlantic in 1912, after it collided with an iceberg during its maiden voyage.[1]

The Titanic was an ocean liner and "unsinkable pride" of the White Star Line.[1]

At midnight, on April 14, 1912, in the North Atlantic, 95 miles south of Great Banks, Newfoundland, the Titanic was torn open by an iceberg, and begin to sink.

Gustav Fiers family travelled on the Titanic. Due to their wealth they were able to survive on one of the first lifeboats.[3]

Iron Man was sent to England by the US State Department to help retrieve some pre-World War I era chemical weapons that were sunk with the Titanic. He convinced the very old and paranoid man who originally was in charge of the chemicals on the Titanic to give him some information. For the mission to the Titanic, Stark donned the Hydro Armor for the first time. While under the ocean, Stark was attacked by the KGB's robot Leviathan that was sent to retrieve canisters. He was able to fight them off and their robot using his new armor.[4]

Two prisoners escape their prison cell using a magical Monkey's Paw taking them on a journey through time. They first they arrived on the RMS Titanic, then the Hindenburg and finally ending up in Hiroshima, just before the Atomic Bombings of Hiroshima and Nagasaki.[5]

Retrieved from "https://marvel.fandom.com/wiki/RMS_Titanic?oldid=5620886"
Community content is available under CC-BY-SA unless otherwise noted.